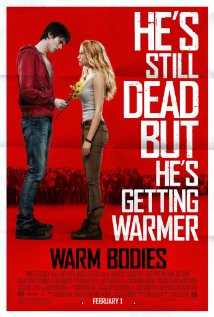 Premise: A teenage zombie questions his lack of life and odd thoughts and habits as he moves through the confines of his existence now that he is no longer human. But his spark of oddity flares when, on a normal zombie raid for human flesh, he falls in love at first sight. Thus unknowingly setting off a slow chain reaction that might save him as well as others. (Rated PG-13)

1) Acting - Total Thumbs Up: Nicholas Hoult made for a truly adorable zombie. His facial expressions and long dead stares were great. His body movements were a little more limber here and there than one would expect from zombies, but this is a minor 'nit-pick'. Teresa Palmer as Juliet was incredibly believable in both her fear and lack of excitement for the emotionally barren area of what her father called 'home'. Rob Corddry added a lot to the film as R's best zombie friend M. The scene where he stares at the picture of the couple holding hands was very poignant.

2) Special Effects - Total Thumbs Up: The creatures that zombies turned into once they despaired of their unlife had great detail and were very creepy. The scene where the bonies land on top of the glass canopy and start pounding on it really brought home how far removed from the others they were. The scenes showing the zombiefied hearts coming back to life looked great.

3) Plot/Story - Thumbs Up: "Warm Bodies" is a darling idea, especially with the undertones of Shakespeare's "Romeo and Juliet." Zombies in most stories and films just 'are', with no real science to support their existence, so taking the extra step to believe they're not truly dead at that stage, won't be much of a mental reach for most viewers. Half the fun is watching the zombies evolving back to what they used to be.

Several themes run throughout the film -- that not all (emotional) zombies are undead, and that people need to connect with others to feel alive. I loved the use of eating brains as a means for the undead to steal memories and feelings from their victims so that they could feel momentarily alive themselves, and how it was used in the telling of the story.

The film felt a little slow in spots, but only a few, and not for long. There were plenty of fun, amusing moments throughout.

4) Stunts - Thumbs Up: There was gun play in several sections of the film. Juliet's side slide and shotgun use, won't be forgotten by the guys anytime soon. "Warm Bodies" also had some decent hand to zombie combat. The zombies versus bonies scene, where the zombies are played by people and the bonies by CGI, probably took a lot of work to synchronize.

5) Locations/Cinematography - Thumbs Up: There were several skyline shots, a few made more impressive by the addition of the wall the humans erected over a large part of the city to keep the zombies and bonies out. The use of the airport as a main zombie hangout was very apt, for incorporating a few of the themes and the wide variety of locations all in one place.

6) Costuming/Makeup - Total Thumbs Up: The department did some really nice work on the zombies. Between the changes to the skin, virus made tracks on the body, and the eyes, they made for a huge contrast as R changed over time. The changes were even more telling on M and a few of the others. The scene where we see R's scars from previous human encounters looked great.

Conclusion: Zombies, tragedy, and romance - an odd mix, but one that was surprisingly cute and satisfying. As hubby pointed out, "Warm Bodies" is the perfect date movie - a mixture of genres that will give both guys and gals something to enjoy.

Rating: 4 out of 5 (Hubby's Rating: Worth Full Price of Admission)
Posted by Gloria Oliver at 10:10 PM