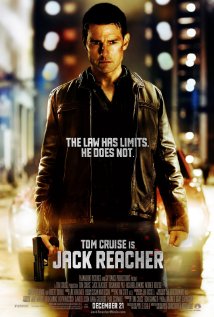 Premise: When an ex-military sniper kills five random people, Jack Reacher comes out of hiding to make good on a promise he'd made the suspected killer back in Iraq. Ready to take care of the problem, Reacher is surprised to find that Barr actually asked for him after he was arrested, rather than fear his appearance. Unfortunately, Barr is now in a coma after being beaten by other felons in a police van, so he can't ask him why. The evidence is overwhelming, however, so Reacher is sure Barr is guilty. But there are a couple of pieces that don't quite fit, and until they do, he's going to keep trying to uncover the truth. (Rated PG-13)

1) Acting - Total Thumbs Up: Tom Cruise was a lot of fun as Jack Reacher. Rosamund Pike's character Helen made a good foil for Reacher. Some very nice interplay between the two actors. Richard Duval lent a comedic touch to several scenes as Martin Cash. Werner Herzog made the Zec masterfully creepy.

2) Special Effects - Total Thumbs Up: Though not a film needing a lot of special effects, the department did a great job with the ones they had. My favorite had to do with mixing the view out of the rifle scope as they panned over the normal view as seen from the parking garage. It really put the audience in the POV of the sniper.

During the big gun battle, ricochets and rock splinters were visible and added to the excitement. The bathroom fight scene with tiles and glass shattering during the violence were seamless.

3) Plot/Story - Thumbs Up: While the main thrust of the story was nothing unusual, the characters and some of the subplots were, making the film much more robust. There were also a lot of little unexpected moments that made the film stand out from others like it. For example: a car chase scene where the person being chased by several police cars decides that's the perfect time to chase after those who've been following him all day, or telling the kidnapper it's okay to go ahead and shoot the hostage. Also the way Reacher and Helen, and later Reacher and Cash, kept turning things once each other. Lots of fun, unexpected things.

There are a couple of plot points that are inferred (why Reacher doesn't own a car, the real reason Helen and her father are so at odds, the bosses above the Zec, a death which had probably been a murder), and are never actually remarked upon. And while they don't detract from the movie itself, it did make for some nice conversation after.

4) Stunts - Total Thumbs Up: The hand-to-hand combat was pretty good and there were several unual moves. The fight in the small bathroom with two big big guys, a baseball bat, and a crowbar won't soon be forgotten. Add in the inventive weapon Reacher uses when they're back out in the hallway, and the scene became priceless.

Totally loved the long car chase scene and the many fender-benders which ensued. Hubby loved the detail of  the hero's car stalling mid-chase. And the way he escapes the situation was as 'cheeky' as it was ingenious.

5) Locations/Cinematography - Thumbs Up: Pittsburgh made a nice backdrop for the film. The spanning views through the sniper rifle and in general, especially those across the area of the original shooting (and from different angles) really locked the images in for the audience.

6) Costuming/Makeup - Total Thumbs Up: I loved the fact that after Reacher got a bump on his head, the blood, the matted hair, and the stained the collar were still there when they cut to another scene as he'd neglected to do anything about them. Injuries resulted in bruises and cuts and were kept from scene to scene, remaining consistent.

Conclusion: A surprisingly fun film with heavy doses of action surrounding a multi-layered mystery of corruption and survival.

Rating: 4 out of 5 (Hubby's Rating: Definitely Worth Full Price of Admission)
Posted by Gloria Oliver at 10:44 PM