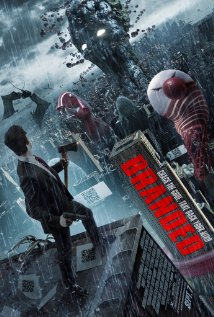 Premise: Hit by lightning as a child, Misha Galkin was marked for an unusual life. Driven to the edge by a number of bad incidents in his life relating to his career in marketing, he eventually comes to realize there's an enemy only he can see, and he sets out to save humanity from it, even if it means doing things their way. (Rated R)

1) Acting - Thumbs Up: Ed Stoppard wore many faces as he worked through the life of Misha, and he wore them well. Leelee Sobiesky glowed in her performance. Her love for Misha shone brightly, and her disappointment and fears further in the film were palpable. The scene where she leaves Misha after she finds him again was very poignant.

2) Special Effects - Thumbs Up: Though not present in flashy amounts in the beginning of the film, the special effects play a large part in the later sections. Most of the effects are subtle shifts in technology, changes that help the audience see it is a future time as we leave the modern age. The creatures (the living embodiment of the brands) Misha sees towards the end, which evolve and grow and go to war on one another, were nicely done. Definitely grotesque enough to give kids the "heebie jeebies".

3) Plot Story - Thumbs Up: A lot of people will disagree with me on this. "Branded" is the type of film where you either get and enjoy the multiple, odd, overlapping layers and symbolism, or you don't. The original US title for the film was "Mad Cow". Cows play an important role in the movie from the moment it begins to the end. They are used as a symbol for people, for biblical type greed, deity sacrifice, and more. This symbolism ties into the new name "Branded" as well, as it can be taken to mean several things - from product branding, with regards to marketing, but also to being branded like a cow by the products we consume.

In a twisted way I applaud them for their misleading movie previews. Yes, it told you somewhat what the film would be about, yet didn't. It's as if by shaping the preview in the way they did, they prove some of the same points stated in the film - anything to get you in the door, even if it has nothing to do with what you'll find inside. (The same can be said for some of the premise blurbs at some sites - this film is not a science fiction thriller.)

It's told in a 'funky' manner as well. Sometimes it acts like a documentary, others like a normal movie, and more. Many viewers might find it slow, and possibly awkward. I liked it anyway.

4) Locations/Cinematography - Thumbs Up: Filmed mostly in Moscow, the old city gives the film a great feel. With the added CGI, they're able to add ads all over the place, the names just slightly different, but totally familiar to the audience. Watching how they change at the different stages of the film was half the fun.

Conclusion: An interesting film that will not appeal to most audiences. But if you'd like to see something with some truths and a sprinkle of insanity, it might just be for you.