(Dying to go see Total Rekall but hubby is on a cut over! Wahhhh!) 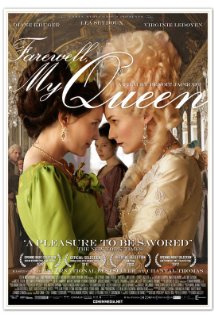 Premise: A young girl, Sidonie Laborde, who is a reader for the Queen, has her ordered life shaken on the days leading up to the French Revolution. (Rated R) (Subtitled)

1) Acting - Total Thumbs Up: Several great performances are woven through this strangely distant film. Léa Seydoux easily portrayed the young woman in love with her queen and clearly radiated the character's feelings of being somehow above others due to her job. Diane Kruger did a great job as Marie Antoinette and skilfully reflected her changing moods and mercurial whims. Noémi Levovsky's portrayal of Mme Campan was outstanding in its understatement as the grand conductor whose job was to keep the queen's life running smoothly.

2) Plot/Story - Neutral: I have not read Mr. Thomas' novel, so can't compare it to the film. That being said, the story in the film moved along slowly with only tiny glimpses into different aspects of the life of those serving the royal household, yet because these glimpses are so tiny, a lot of the context or depth of learning about their lives and why they are the way they are is lost, which in the end hurts the understanding by the audience of how disturbing the changes coming to the lives they've been used to are. Worse, it makes it hard for the audience to really connect with any of them.

As Mme Campan states to Sidonie, she has no friends in Versailles. It is Campan character and not Sidonie's character which encapsulates and shows the most information regarding life at the palace. The support personnel's sole function being to serve while at the same time jockeying for position among themselves.

The main recurring theme of the film is unrequited love - Sidonie's blinding love for the queen, the queen's distracting and somewhat self-destructing love for Gabrielle de Polignac. Yet even this is not understood until deep into the movie.

3) Locations/Cinematography: Because the film follows the life of the queen's reader, most locations of the film are not in the luxurious rooms of the palace of Versailles. Rather, the audience gets to experience the narrow, falling apart, and spartan spaces of the servants and those of the aristocracy not high on the list of the favored.

Several unusual styles get used in the film, the camera following Sidonie from just over her shoulder as the pushes through crowded hallways or runs down deserted corridors.

Dead rats made several appearances, but it was hard to tell if they was a commentary on the difficulties of keeping rodents away even at the palace or the rotten nature of the politics of the time.

4) Costuming/Makeup - Total Thumbs Up: From peasant garb to the queen's gowns, great attention was paid to make the costumes proper for the period. And as was normal then too, only the most wealthy actually got to put on different clothes on a daily basis.

The only point that seemed odd was the lack of makeup. Sidonie and the other servants wore pretty much none. But aside from one scene where the king had just finished a consultation with his counselors which his wife attended, the white powder makeup was never really seen. And even in this particular instance it was very lightly worn.

Conclusion: A fascinating look at a different group of people than those usually depicted for the time right before the French Revolution. Yet one lacking in a real plot for audiences to become vested in.