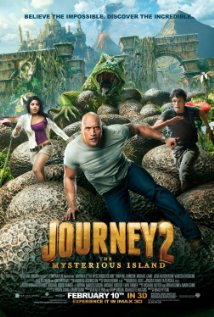 Premise: Trying to bond with his step-son, Hank goes with Sean in an attempt to find Sean's Grandfather after Sean receives a cryptic coded message. A message stating that Jules Verne's Mysterious Island is real.  (Rated PG)

Review: "How about an adventure?" a repeated theme with stunning visual results, just lacking in good writing. Sad to say as I'd really been looking forward to the film.

We lost Frasier and gained Johnson. Not a bad deal as both are more than capable. Even gave the writers fodder for internal conflict. If only they'd not been so heavy handed about it.

Gorgeous visuals. The storms out at sea and then the vistas on the island were magnificent. One promised breathtaking view definitely was that. The flaura and the fauna were all well done and pretty darn cool. The underwater scenes totally rocked.

But for every place the visuals or the acting sang, the story telling pretty much crashed. Which is a pity. Heavy handed, with awkward conflict, the only parts that somewhat worked were the comedic bits. Luis Guzman added a lot to the film to make it tolerable, and of course the Rock's dating tip number three was a hoot. (No, guys, that does NOT work! lol)

The story ran hot and fast, so fast, you couldn't appreciate much of the island. And there were discrepancies or conveniences that just couldn't be explained or made no sense. Sorry, but an old man alone for two years on the island could not do what Alexander did, even if it was cool.

Ten to thirteen year olds won't see those flaws, so they should have a blast. For us old timers, seeing the city and the Nautilus will be half the treat, even if the sub is kind of small.

So for a family film, it will do. Give wonder for the kids, hormones for the teenagers (boys and girls), and cool visuals for the adults.