(No movie review this week. Sept really did end up way busier than normal. This week I'm participating at FenCon.)

It's been FOREVER since I've played a First Person Shooter game of any kind. A lot of it had to do with spending my time on MMOs, but also because a lot of the newer games make the character movements and screens in such a way that, frankly, make me so dizzy I want to hurl. (Missed out on SPACE, Borderlands, FEAR - Waaaaahhhh) Hubby doesn't have this problem, so it's all good for him. (Bah humbug!)

I played the original Deus Ex years ago, so when he told me they had a prequel called Dues Ex: Human Revolution, I hoped I might actually have a shot at playing it. And YES! No super wobbly graphics! I can PLAY THIS! Woot! 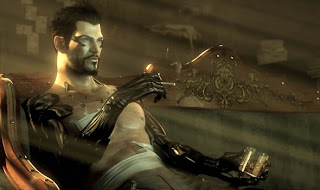 Premise: Adam Jensen, security chief at Sarif Industries, is massively injured when he tries to stop an infiltration of the science labs at the company. He finds the perpetrators only to be overcome, as one of them exibits greater than human abulities. Jensen is the sole survivor to the incursion, but is in critical condition. Sarif puts his men to save him and gets him augmented with cyber limbs. Six months later, he calls Jensen back into active duty as hostilities once more escalate. Jensen wants answers and is now more than equiped to get them.

Babbling: Started the game about a couple of weeks ago and have been having a BLAST! Currently past the second boss and in a super secret facility in an undisclosed location. (Finding me some missing scientists I am! Bwahahahaha.)

The elements I loved about the original are present in the prequel. I couldn't be more ecstatic. Loads of world info you can choose to read through ebook readers and newspapers left around in the game world, even emails in computers. Nice solid story content. Fun characters. (Totally love the voice work by Elias Toufexis for Jensen!) Side missions add a nice compliment to the story and world as a whole. Love that I've been able to guess at several elements because I am reading what I find, am talking to the civilians around me, and doing these side quests. They serve to enrich the whole experience. And some of the rewards of these side quests give (aside from the xp!) are nice indeed!

I super love that sneaking around is more condusive than just shooting at everything (brought back all my fond memories of Thief!). There are hidden passages all over the place, but there are also some that take you nowhere. So it ups the exploration aspects a bit, I think. And sometimes there are goodies to be found at these dead ends as well. (WARNING: Sewers are not nice. Always try the front door first. Might save yourself some agony. lol)
There's a fun running joke I've been having a blast with. Jensen keeps asking people how they got his frequency as he keeps getting calls on his implants from all over the place. lol. Poor guy never does get a straight answer on that one from anyone. Hee!

Very nice graphics and videos. The two tierd city in Asia is amazing as you fly in. Pretty spectacular and kind of creepy as you look up at it in different areas. And of course there's all sorts of moral issues to consider with all the awesome tech and changes going on in the world's societies, even as some things never change-greed, power hunger, back stabbing, etc.

Totally loving my Q key. The subdue augment ability ROCKS! Especially when you can increase the augment to subdue two peeps at once-great sequences on the take downs too. Oh yeah! And the Typhon weapons system is the BOMB! Just the cool graphic is worth it. Heh heh. Enjoying many of the other skills you can pick up along the way as well. Hacking is cool! And you have to think too, suckers are sneaky in some of the software hacking setups-if you don't pay attention you won't get past it.

I'm pretty sure everything is going to come together in the Artic Sea and I'm totally looking forward to it. Bwahahahahaha! Also heard there will be even more content coming in October with Dues Ex Missing Link. Booyah!

A definite Thumbs UP!

Addendum:
Finished the game!  Here are some tips:
Bosses:
1)  Big Bawny Dude: Red barrels are your friends. Throw them at the guy. Also, there are two rooms with goodies at the northeast and southwest corners. Better yet, on the NE room, if you jump on the boxes and hide against the wall with the entrance, no matter how many grenades he throws, you'll take no damage. Good place to take a breather. Do not try to grapple with this dude! Shoot from afar.

2) Lady: She can turn invisible. Your best bet is to have previously gotten the Typhoon system (which ROCKS!) and do two immediate attacks with it. Took her down easy!

Cheat - Avoid changing your chip. Won't say anything more. I did it, and it makes 3rd boss harder, but hubby avoided it, so had full powers.(I knew it was a bad idea, I just didn't know if the consequences of not doing it would be bad. Hubby said aside from some glitches here and there, it did not affect him.)

3) Leader of the Trio: Also can turn invisible. But he tends to jump over the central room divider. Just run around and hide behind the columns to the center and wait for him to come over. Take a few shots, run the other way, lie in wait again. (If you shoot too much, grenades will blow you up. Machine gun did the trick.) If you don't change your chip, you can just Typhoon his ass! Heh heh.