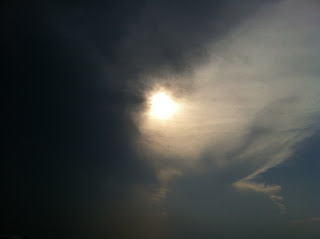 Utterly loved this strange Ying/Yang cloud formation around the sun. Sometimes it's amazing the things nature makes up for us to see! 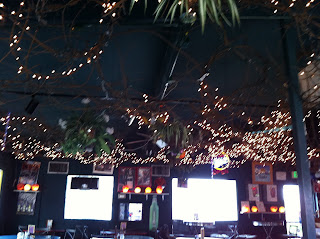 There's a weird restauran/bar/antique shop called Obzeet.  The whole ceiling is filled with strings of light. I'd driven past this place for over ten years and it wasn't until my boss told me the food was awesome that I ever stopped there.  Loads of funky stuff from all over the world. Great sandwhiches and other food. Their poppy seed dressing is the BOMB! The also have salt lamps. And they have a huge selection of evil desserts! 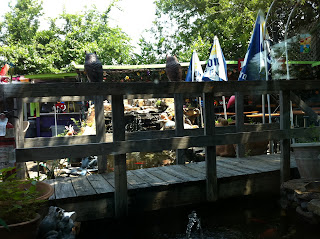 They also have a large back area where you can eat outside. The pond is full of large goldfish. You can see one past the rail of the small bridge. 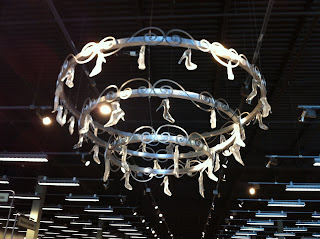 Had to go shopping for ankle boots. And I am so picky~! I know what I want but finding them is something else altogether. (I only own like 3 pairs of shoes. I'm not your usual girl?) Anyway, one of the places had this cool glass shoe chandelier. Too cute! 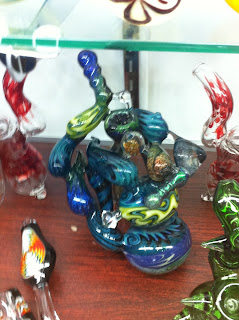 Finally stopped and checked out a new store by where I live called Blue Phoenix.  It's mainly a smoke shop, though my daughter checked it out and found out the had all sorts of stuff in there. The gentleman at the desk told me these are called bubblers. I'm thinking they're like a hookah. They had all sorts of these things. As you can see, some are mighty weird looking~! Heh heh 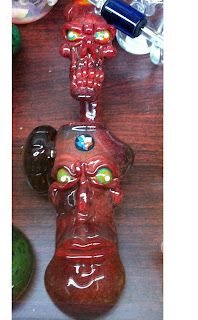 Next couple of weeks could prove very picture rich as I've conventions back to back. I'll see what I can cook up for ya'll!﻿
Posted by Gloria Oliver at 6:00 AM