April Showers are upon us! (As evidenced by some huge storms this past week! Eek!)

"Cross-eyed Dragon Troubles" is now out in Trade Paperback! Woot! The day is finally here. Available at Amazon and directly from the publisher HardShell Word Factory.

The Anthology, A Time To...Volume 2, which includes my story "Mentor for Hire", is now OUT! Not quite yet listed on Amazon, but can be purchased through Lulu for the trade paperback version. Also available in Kindle and other ebook formats. More info can be found here 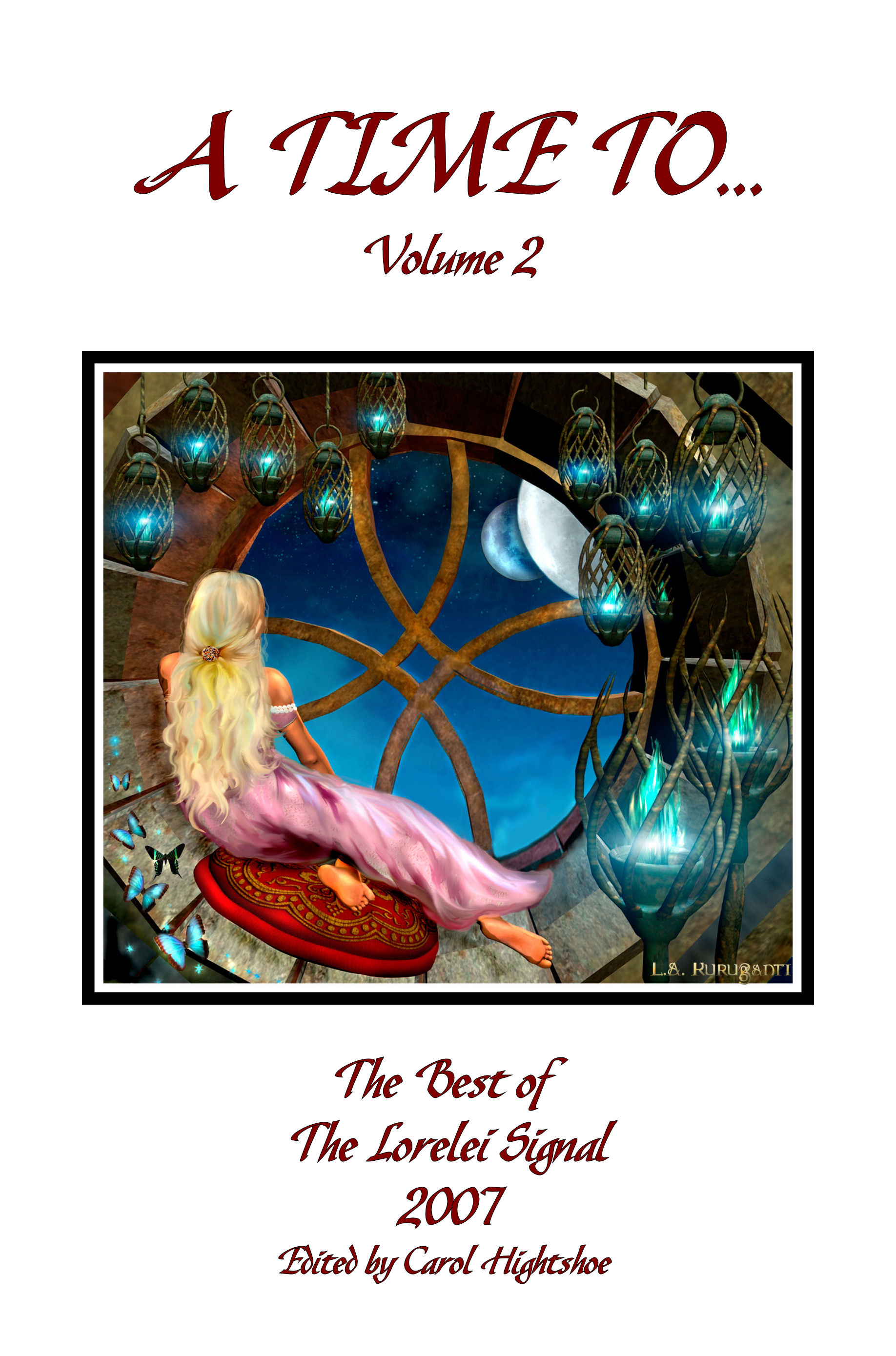 No real new updates on The Phoenix Project anthology to help the Louisianna libraries. Still no cover that I know of, but the project is proceeding. There will be illustrations for the stories too, which should be fun.

Now on version 3 of the essay on Supernatural for trying to get into the Smart Pop book they are organizing for the TV Show. Didn't help that the first two months of 2008 I had ZERO time for writing. Was twitching in withdrawal. Had to dump #2 as it was too broad in scope, I'd hit 5K words and still had half more to go, so...picked one vein out of that and hopefully #3 will be the one. Hopefully I won't be too late getting this done. I want in there BAD! lol.

Have received a couple of reviews for "Willing Sacrifice " and "Cross-eyed Dragon Troubles ". The one for "Willing Sacrifice" comes from MyShelf.com and the one for "Cross-eyed Dragon Troubles" is currently posted at the Mist and Stars blog on an entry for March 26th and should make its way eventually onto the Enternal Night website. Just click on the two review name links if you'd like to see what they had to say.

Have been going nuts the last couple of days trying to catch up with the promo to do list I made from the last EPICon. Way too many items to follow up on and too many still not done from before. Just as I did last month I still need to set up bookmark templates for Cross-eyed and make the postcard templates for it and Willing Sacrifice. Also need to remember to do my flyer for Cross-eyed too. Realized I was definitely missing stuff when I set up shop at AggieCon last weekend. Eek!

No news on the new logo yet. I am frothing a little in eagerness as it looks like I will need to break down and try to do some book trailer promos but can't get going on them till I have the new logo. No point in branding myself with something I plan to drop. So it's the waiting game for me. Not like I don't have plenty to keep me busy in the meantime though.

Spent an hour or so Saturday putting up info on the books at Free Ad sites. Seems it is one of the newest gimmicks for promotion. No idea if it will do anything, but most let me upload the book covers so couldn't hurt.

Even as I was working on this, I came up with at least three items I've forgotten to do! lol. Marketing is never ending. I rather be writing!!! lol.

In the first part of March I got to attend EPICon. This year's event was held in Portland, OR. The day I left, I was thinking to myself that I was going from sunny warm Dallas to probably cold and or rainy Oregon. Life, as usual, likes to show humor in torture. That morning, we had an ice storm come in, which hit hours earlier than expected, so not only did the wings get caked with ice, but our engine actually froze. We got to sit in the plane for 3 hours before we were able to leave for the 3.5 hour flight. While it was way cool seeing them go through the process, it did make for a long day. When we got to Portland, it was a totally gorgeous day there. Also found out 300 or more flights got cancelled in Dallas, so we were lucky we got to leave at all!

Jeff Strand was making a stop over in Dallas, and we ended up on the same flight. This was a good thing for me, as he was able to tell me the gate had changed, because I'd not heard the message over the PA. Since he had started out at 5am or so that morning, it was a TRULY long day for him.

I had expected to help out with voluntary functions and whatnot at this convention, but ended up not having to. I was also surprised because we did get some new blood on the panels and this got me a huge to do list from the Promo Track! Also found the coolest, evil, warped looking tree ever in the park across the street. Another treat was the field trip to Powell's, the US's biggest new and used bookstore. The place was awesome!

And as always the banquet night was a blast! Jeff's MCing was a thing of beauty, as always! (I teased the heck out of him all weekend too - which is not my normal self - don't know what got into me!) I got up there and read my assigned category and the winners and didn't fall, trip, or make a total fool of myself, so the evening was a total thumbs up! Even had great company at the table and much fun ensued. Also Kathy Sullivan got kudos from the podium for doing volunteer work despite having a broken ankle. Go Kathy! And, believe it or not, I took pics !

The other convention I attended in March was AggieCon. The hotel was even farther from the University than last year, so I was quite thrilled I got assigned a driver! Lance picked me up from the airport and would make sure I got back to the hotel at night, so that was awesome.

A lot less guests this year, but I thought attendance was as good if not better than last year. I sold six out of the eight books I brought with me (being so far from the hotel making lugging things around a little more restrictive) so I was thrilled! Got to spend some time talking with Rachel Caine, Darlene Bolesny, and Mel White so that was great! Saw friend Tom Knowles again, and he was pushing a new Texas non-fiction book as well as the opening of Lone Star Publishing and Dark Star Books . Also had a really entertaining panel with Todd McCaffrey, Steven Brust, and Rachel Caine. This is where the sentence of the weekend came up and was used and abused throughout (it's a little racy so figured it would be best not to repeat it), and also a point of contention was brought up having to do with the art show and censorship. What was fun about the censorship part was that a number of the guests and congoers put blue tape X's on their chests at strategic places. One gentleman, who was costumed as an ogre, (darn nice job too!) proved he was an ogre to the core as he put his giant X on his belly button, totally missing the point as an ogre would. It was great!

Main media guest was actress Ellen Muth, who played George in the TV series "Dead Like Me". A new movie based on the series will be coming out on DVD in July 2008! She was incredibly sweet, beyond skinny, and looked to have had a good time. Also JM McDermott was making a big splash pushing his author cards toting them as "dangerous and that they could cut you". He was having way too much fun! Heh.

It just occured to me that Mary, who was running the con suite, messed up her ankle during the convention (got attacked by a couch). That's two people in two cons with messed up ankles. I hope this is not some kind of new trend! (Like Kathy, Mary was a total trooper going beyond the line of duty and sticking it out all weekend making sure people were getting fedf! Heck that morning she was making waffles! Kudos to her!)

I've got no more conventions till the end of May, which is awesome as I have way too much to catch up on before then. A-kon falls this year on May 30 - June 1st. My understanding is that this year they are asking as many people to come in costume as possible as they will be trying to get the con on one of the world records books! That should be a blast to see.

Finally was able to get a little writing done this month but not as much as I would have wanted. Still, grateful for whatever I can get! Work is getting more and more...ugly? As unexpected issues with one of the major projects came up and the nasty stuff looks to be hitting the fan. It is very possible the company will not come out unscathed if even in business. The next week will say alot. Need to make sure to polish up my resume. Eek! Not looking forward to any of this at all! (Need to win the lotto more than ever! lol

The Citizen's Police Academy is over. Very well worth it and would recommend it for anyone. My understanding is that some sort of program of the same type is available at most cities, so if you have any interest, do it! Learned lots of fascinating stuff. I think one of the more eye opening statements that people don't think about is the fact that police enforce the laws, they don't make them. So there's no point berating them for it. Heh heh

On the reading front, finished Dume Key by Stepehen King - the total bomb as usual! Terry Pratchet's Night Watch, love those characters! And am currently reading an older book called "She" by H Rider Haggard.

May the April showers not wash your home away! Have a great month all!

Posted by Gloria Oliver at 2:23 PM