Strange Women – Stange Worlds is doing a set of live virtual readings from speculative fiction authors. The event is free and will be on the Zoom platform. More info on the overall event at http://nydamnprints.com/StrongWomenStrangeWorlds.html

I am scheduled to read from the science fiction novel “Alien Redemption” on Friday 6/4/21. All the times on the poster are EST. So my reading with five fellow authors will be at 11 AM CST. You have to pre-register https://bit.ly/345p7ZI

Take a quick lunch break for a vacation from the everyday world!  😁

I’m participating in two giveaways this month! The first is Adventures of a Lifetime – a Fantasy Group Giveaway sponsored by Prolific Works.

Yep! There’s going to be a Black Jade audiobook! 🥳

It was not something I’d originally planned, but…

The reader for the book will be Tom Briggs – he has about 15 yrs experience recording books for the blind or the visually impaired. He also has a weekly radio program on Radio Eye (a closed circuit program available to persons with visual difficulties) and he is actively involved with VIPS (Visually Impaired Preschool Services). With Dai being blind, this seemed a great fit for both of us.

I think that’s it! I hope you had a fabulous week!

Posted by Gloria Oliver at 12:05 PM No comments: 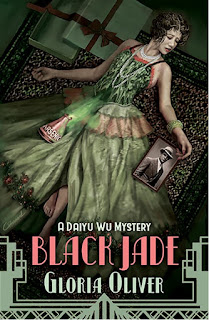 The cover above is for my latest novel called “Black Jade – A Daiyu Wu Mystery.” The first book in a new series of cozy historical mysteries! (Uhm, my first ever series, too. So nervous about that part! Lol.) 😄

Awesome art and cover by the talented Charles Bernard!

Here’s the back matter:

Could an old-fashioned ballgown be used to commit murder?

Daiyu Wu is aware that fear of the Yellow Terror has made her nationality a rare breed in the Lone Star State. Being Chinese and blind makes her doubly unique in 1930 Dallas. Despite these impediments, anyone who dismisses her for either fact does so at their peril.

One day, at her family-owned laundry business, Dai detects the scent of burned garlic. With the help of her companion, Jacques, the source is soon discovered. It is a green ballgown. The gown has money pinned inside it to pay for the cleaning, but oddly, it came with no address label to identify its owner. Her extensive knowledge leads Dai to believe someone has committed murder using arsenic. The perpetrator is trying to use White Laundry to hide the evidence. But no mention of foul play turns up in the newspapers, and there’s not enough proof to convince the police there’s been a crime.

Her curiosity and intellect stimulated like never before; Dai ignores the possible consequences and sets out to solve the mystery with the help of her canine companion, Prince Razor, and her confidant, Jacques Haskins. It’s either that or let the killer get away with it — assuming a spoiled popinjay, his jealous self-appointed girlfriend, and Dai’s overprotective parents don’t get in her way.

It is currently LIVE for Trade paperbacks (long story), and on pre-order for ebook editions. Reviews are coming soon!

This week, Virtual Tourist will be focused on Styx: Master of Shadows by Cyanide Studios.

For anyone who loved the Thief games, you’ll want to check this one out. First-person sneaker for the win!

I love that while you are learning about the world and the problems there, there is a subplot you don’t realize is there until you’re 25% or more into the game. This is something of a mind-bending game. I can’t wait to see what other secrets they reveal as the story moved forward.

The new album for Styx can be found here.

Game start screen. You can already see there will be lovely visuals! 😄

The cause of all the troubles. Magical amber. It can open your mind, but it’s also highly addictive. The human and the elves have a truce, but there are those undermining the status quo.

Styx has been caught by the humans currently controlling access to the Tree and its amber. I don’t know yet if Styx was ever human.

This place is huge. Here is one of the hallways. Massive ironworks and gates. Styx has a few tricks up his sleeve though. He can make temporary clones of himself!

This pic gives you a peek at the amazing architecture. This citadel is enormous!

There are all sorts of secret nooks and crannies you can use. Here a view from above of one of the rooms. I love the chandelier!

There are a lot of bad things going on in this place. Human experimentation, probably being the least of it.  😱

They do such a good job with the graphics, I’ve felt a little queazy on some of these long drops. 😋

The big object is an elevator. As I said, this place is immense!

Home sweet home. Though his brain is addled and he keeps hearing voices, Styx still manages to make it to his safe place inside the citadel.

Hope you all have a great week! And Happy Mother’s Day!

Posted by Gloria Oliver at 11:31 AM No comments: