New Release - A Lone Star in the Sky 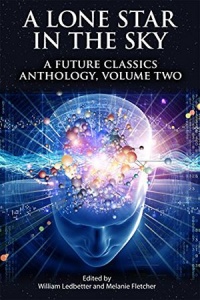 Released this week is the Future Classics volume 2 anthology - A Lone Star in the Sky.

Edited by William Ledbetter and Melanie Fletcher, the collection features stories from the members of Future Classics - a DFW Writers Group. I've been part of the group since around 2002! They even still talk to me! :P


Here are the deets and the stories inside the anthology:

The Texans are at it again!

A man sent to stop the world’s first zero-G birth. A deep space pilot who runs headlong into Einstein’s theory of relativity. A synthetic human fighting for survival in a world that sees her as disposable. All these stories and more can are in A LONE STAR IN THE SKY, the second anthology from the Future Classics speculative fiction writers' group of North Dallas. Featuring eighteen stunning stories of science fiction and fantasy. Including works by Nebula winner William Ledbetter ("The Long Fall Up"), and Nebula nominees Jake Kerr (“Biographical Fragments of the Life of Julian Prince”), and from Bonnie Jo Stufflebeam ("The Orangery”). A LONE STAR IN THE SKY covers the gamut of speculative fiction and proves once again that everything is bigger in Texas.

“The Rings of Mars” by William Ledbetter
“Afterimage” by J. Kathleen Cheney
“Biographical Fragments of the Life of Julian Prince” by Jake Kerr
“The Damaged” by Bonnie Jo Stufflebeam
“The Lotus Eaters” by Michelle Muenzler
“Surfing USA” by Gloria Oliver
“The River of Lost Souls” by C.A. Rose
“Ghosts To My Fingertips” by Rachelle Harp
“Kosher Beef” by Rook Riley
“The Lark Ascending” by Melanie Fletcher
“The Life Expectancy of Cockroaches” by Michelle Muenzler
“The Wanderers” by Bonnie Jo Stufflebeam
“The Long Fall Up” by William Ledbetter
“The Queen Lorellai” by Gloria Oliver
“On Trial” by Rachelle Harp
“Lost in Whitby” by Melanie Fletcher
“Taking a Mile” by J. Kathleen Cheney
“The Old Equations” by Jake Kerr

I've got two stories in this one. "Surfing USA" which was first published in a CD Anthology back in 2004 and "The Queen Lorellai" which won Honorable Mention at the Writer's Of the Future for Q1 2016.

Check us out and get a little Texas in your bloodstream! :)

Available from Amazon in both Trade Paperback and Kindle.
Posted by Gloria Oliver at 10:31 PM