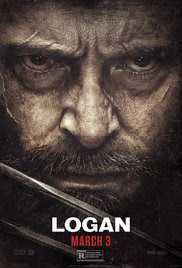 Starring: Hugh Jackman, Patrick Stewart, Dafne Keen, Boyd Holbrook, Stephen Merchant, Elizabeth Rodriguez, Richard E. Grant, Eriq La Salle, and more.
Directed by: James Mangold Story by: James Mangold Screenplay by: Scott Frank, James Mangold, and Michael Green Cinematography by: John Mathieson Music by: Marco Beltrami
Premise: It is the year 2029. Mutants are no longer born, the weird mutation died out. Logan and Xavier are old, and neither are in good health. Everything they've lived through seems meaningless now. So when a woman approaches Logan professing to need his help, he's not interested. He's got other things to worry about. But she's not about to let this go. (Rated R)
Review:
1) Acting - Total Thumbs Up: Hugh Jackman reprises his role as Wolverine. This is an older, more pessimistic Logan. Hugh Jackman does an incredible job. He gives an excellent performance throughout. You feel his aches and pains, he's so good! :)
Patrick Stewart also reprises his role as Charles Xavier. Though ill, Charles still does his best for his remaining student. Patrick brings all the light and comedic moments to the tale. And he does it so very well! Watching the two of them go back and forth was a lot of fun.
Dafne Keen as Laura is a treat. Not only does she have the Wolverine glare down, but she's also full of little surprises. Boyd Holbrook as Pierce is unexpectedly multifaceted. Though, his prosthetic hand kept trying to steal his spotlight. :P
2) Special Effects - Total Thumbs Up: Lots of nice and subtle special effects in this film. Two of the effects stuck with me.
The first is the awesome work on Logan's abused body. One look at his face, his shoulders, and arms and you know this is a man who has suffered pain. When you see ooze coming from where his blades previously cut the skin, you know he's in trouble. And when you see his wounds at the clinic - eek!
The second is Pierce's mechanical hand. You would swear it was his true appendage. There's a scene where it's disconnected from the socket. Then he plugs it back in and twirls a small screwdriver. It is such a seamless move that it sells its reality to the audience, even though it truly isn't real.
Laura's blades and Wolverine's were great. Xavier's unintended attacks, and the paralysis and other problems it invoked, made for a super cool scene in the city.
Oh and Logan's limo? Priceless! Though it loses the fight with the fence, it makes up for that by bringing it along and using it as a weapon! Sweet!
3) Plot/Story - Total Thumbs Up: When you first realize Wolverine is not well, many fans will be wanting to know why. How could this be? Wolverine is a mutant, and his mutation is regeneration/healing. Oh, it's not a problem with the plot. There is an answer. And you'll have to wait for it! But if you're not paying attention, you might miss it. So when the scientist talks towards the end of the film in the woods, pay attention! It won't make immediate sense to connect it to Logan and what's wrong with him, but if you give it some thought, you'll see that they are. I have to say, the whole idea of it was brilliant! (High fructose corn syrup is the devil! I knew it! Bwahahaha!)
The general plot is straightforward, with several points being obvious in their direction. But then, when you least expect it, you get a little surprise pop up here and there, throwing in some new angle, some new bit of fun.
There are a lot of piled layers to the film as well. Regret, guilt, debts, family, reality vs. fantasy, putting one foot in front of the other out of sheer stubbornness. Living each day for a dream that's out of reach just to make it through another day.
Tons and tons of touching moments. I did find it ironic how Canada is mentioned as a place of safety when for Logan it had been anything but. :P Callisto as a man was also a bit of a surprise. I didn't read the Laura arc in comics so I can't make any comments on that, but I did enjoy it! (I'm a sucker for well-done angst.) :P
4) Stunts - Total Thumbs Up: This is a film with Wolverine, so a ton of stunts is definitely an expectation, and you won't be disappointed. Tons of hand to hand combat. Watching Wolverine and Laura go at it together is a sight to behold. And all the people involved in Xavier's unintended attack were fab!
5) Locations/Cinematography - Total Thumbs Up: From the neat hideaway in Mexico to the location of Eden, the farm, and more - they all looked great. The sunset behind the caravan looking for Laura was breathtaking. Some nice view of mountains, tundras, and more. Visually satisfying stuff!
6) Costuming/Makeup - Total Thumbs Up: I enjoyed the care they took with some of the clothing used in the film. Especially with regards to Laura. Mean, tough exterior, yet she showed a softer, girlier side with some of her random choices in eyewear and clothing. It was adorable and added an unexpected layer to her personality. Xavier putting on the hat he buys was such a cute moment!
One the makeup side, all the work on Hugh Jackman was fabulous! It screams out even more so when we meet an unexpected participant. Made for a striking contrast.
Conclusion: Logan was a fun and emotional film. Tons of action and more. Some typical moments but lots of non-typical as well. There's also a Deadpool intro before the main movie. Disturbing and too funny all at the same time. lol.
Rating: 4 out of 5 (Hubby's Rating: Worth Full Price of Admission)
Posted by Gloria Oliver at 9:24 PM