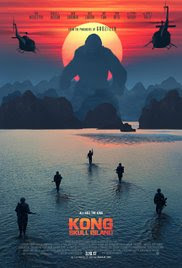 Starring: Tom Hiddleston, Samuel L. Jackson, Brie Larson, John C. Reilly, John Goodman, Corey Hawkins, Toby Kebbell, Jason Mitchell, Shea Whigham, John Ortiz, Tian Jing, Will Brittain, Miyavi, and more.
Directed by: Jordan Vogt-Roberts Screenplay by: Dan Gilroy, Max Borenstein, and Derek Connolly Story by: John Gatins Cinematography by: Larry Fong Music by: Henry Jackman
Premise: In 1973, just as the Vietnam War ended, a researcher convinces a senator to allow his team to go with a survey group to a newly discovered island. The helicopter squad assigned to take them there gets a nasty surprise when they drop seismic testing bombs in the jungle. The destruction brings forth a creature worse than any enemy they've fought before. Getting off the island will be much harder than getting in. (Rated PG-13)
Review:
1) Acting - Total Thumbs Up: Lots of great performances from the cast! Tom Hiddleston is a man stuck between worlds as James Conrad. Samuel L. Jackson plays Preston Packard - an Ahab looking for his white whale (aka giant gorilla) nemesis. Brie Larson was both spunky and full of feeling as photographer Mason Weaver. John C. Reilly was a hoot as Hank Marlow.
2) Special Effects - Total Thumbs Up: Saw this in 3D but wish we'd been able to see it in IMAX 3D. Some truly phenomenal backgrounds mixed with special effects. The giant auroras around the island at night were amazing.
The outside view of the perpetual storm around Skull Island was very reminiscent of "Star Trek the Motion Picture." Once they go inside the cloud, the "wow" factor went way up. The entire ride was amazing! Fabulous images with the off colored lightining~!
Kong looked great. The scars from previous fights were a great touch. They did a terrific job with all the creatures - the dangerous and the non-dangerous ones. :)
There are tons of explosions, machine guns, gas, rifle fire, napalm, and more. The scenes when the group first meets Kong were fabulous. You do not willingly mess with a giant gorilla, people!
3) Story - Thumbs Up: The entire film seemed to be not only a giant monster movie but one paying homage to all sorts of other films. Think "Apocalypse Now" meets "Moby Dick" with a dash of "Enemy Mine" and "African Queen." They even throw in bits from the Millenium Falcon's hyperdrive malfunction and the storm around Voyager from Star Trek. In-jokes abound!
The big theme of the film is soul consuming obsession. Bill Randa's obsession got them to the island, Packard's is what almost gets all of them killed. The hubris of man knows no bounds. It's your fault if you start blowing things up, and the locals take steps to show you they aren't happy about it. Duh! And you should never assume monsters are stupid! (These sure weren't!) Not if you want to survive or make your sacrifice mean anything. :P
Lots of light moments, which help diffuse some of the tension. It was used well to show the bonds between and the differences of some of the characters. They spent the time to let us get to know them a little, which is ideal for making the audience care about them and not wanting them to getting killed. Plenty of faceless ones to get ground up, though, so expect a high body count.
Aside from the impromptu scares to make you jump, the plot is pretty straight forward. Lots of mayhem, monsters, and fights to keep everyone entertained, though.
SUPER IMPORTANT -  You must sit through ALL the credits! When you see the black screen - do not move! There is more! Wait...for...it! :)
4) Stunts - Total Thumbs Up: Most of the gags are CGI based, but still look darn cool. The main actors still get whipped around, thrown, attacked, and more so there was plenty of work to go around. :P
5) Locations/Cinematography - Total Thumbs Up: Filmed in Hawaii, Vietnam, and Australia, we get a ton of fun sites and beautiful photography. Add in some of the cool effects for the aurora or a giant gorilla standing in the middle of signature backgrounds, and you've got a visual winner. :)
Conclusion: If you like giant monster films, action, explosions, and craziness, wrapped around a simple frame this movie won't disappoint. Good "just for fun" fodder.
Rating: 3.75 out of 5 (Hubby's Rating: Worth Full Price to See Again)
Posted by Gloria Oliver at 9:30 PM