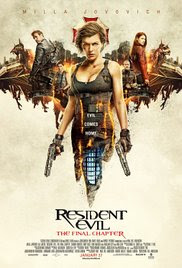 Starring: Milla Jovovich, Iain Glen, Ali Larter, Shawn Roberts, Eoin Macken, Fraser James, Ruby Rose, William Levy, Rola, Ever Anderson, and more.
Directed by: Paul W.S. Anderson Written by: Paul W.S. Anderson Cinematography by: Glen MacPherson Music by: Paul Haslinger
Premise: Having survived a trap in Washington, D.C. Alice gets contacted by the Red Queen - Umbrella's AI Computer. She warns that in 48 hours the three thousand plus humans left on the surface of the planet will be exterminated. Their only hope is for Alice to come back to the Hive to retrieve the antidote for the T-virus. One the Umbrella Corporation has kept hidden from the world. The ultimate secrets are about to be revealed. (Rated  R)
Review:
1) Acting - Thumbs Up: Familiar and new characters fill the cast. Milla Jovovich, Iain Glen, Ali Larter, and Shawn Roberts reprise their previous roles in the Resident Evil universe. A couple of them get to play more than one. :) Milla Jovovich continues to give Alice some nice layers with what little she's given to work with. Iain Glen looks to have had a lot of most fun playing multiple roles in this one.
2) Special Effects - Thumbs Up: It's hard to say if it was due to budget cuts or the direction the group was ordered to follow, but some of the filming choices made a lot of the special effects look cheap or mediocre. Which is a shame, because there were some neat effects in there.
The first creature that attacks Alice is filmed in such a way the audience can't get a sense of what it look like. All you see is a blurred, giant blob of flesh. Between all the shaky cam and giggling, weaving viewpoints. They did slightly better with the next creature, but even that one the good glimpses seemed doled out rather than consistent.
Great work on the zombies. The ones hung from a bridge and only reacting when the trucks drove beneath them were an awesome detail. There's one that shows up in the Hive that gave it all he had despite being hung to dry, poor thing. He looked great!
The Hive itself was fab. The recreations of several familiar places and the transformation of others were well done. The evil laser corridor makes a comeback. Bwahaha! The bridge/walkway coming up out of the water was awesome.
3) Plot/Story - Thumbs Down: Hubby has loved this franchise since day one. I've gone and seen all of the films with him. Some have been better than others, yet you don't tend to expect too much in that department. The action and special effects are what people truly come for, and they usually deliver quite well on that aspect of things.  This time, though, they failed at both. :(
The plot was awful. Too much of it was contrived for convenience. No real surprises.
It was bad enough that the audience gets thrown into the deep end with little explanation. (And with information that doesn't match info previously given in other films!) Then we're "told" Alice survived a trap in D.C. but got to see none of it. New characters are thrown at us, but the audience is given no time to get to know them. Yet we're expected to care when they die...
Alice has 48 hours to get the antidote and save humanity. Yet the story has the characters waste hours upon hours preparing for a coming attack on the human "stronghold" rather than just go to the Hive to save what little of the human race is left. Instead, Alice leaves herself two measly hours to break into and infiltrate a giant underground facility and find the elusive antidote. One that could be locked up anywhere in the facility and not easily accessible. Right...
Wesker's job is to keep people out of the Hive. He knows Alice is coming. He and Isaacs keep talking about doing lockdowns and having all the security primed. So what does he do? He keeps the giant door leading into the hive WIDE OPEN! Even taking into account the supposed "power grid issues" he still had plenty of time to close the thing but doesn't. (What's hilarious about the super convenient "power grid issues" is that if they truly had rolling power outages, all of the people in the cryo tubes would be DEAD!)
Don't get me started on how the "power grid issues" get used to make convenient problems for the infiltrators. Ugh.
As if the plot issues weren't bad enough, they ruined most of the action shots with shaky cam, blinking lights, wobbly angles and any excuse to not get a good clear shot of the action. Made no sense. You'd get one impressive bit of fighting, then a ton of jerky crap you couldn't keep track of. *sigh*
4) Stunts - Thumbs Up: Lots of stunts and neatly choreographed battle scenes. But they too suffered from the horrible shaky cam, wobbly angles, and strobe light effects. Boo! It was frustrating to get something super cool and then something almost unrecognizable. Double boo!
5) Music - Total Thumbs Up: The one bright spot of the movie was the music. Paul Haslinger's "A Force so Evil" track which is used as the film opens got the blood flowing and built a growing sense of excitement. Too bad the plot and bad filming couldn't follow through on what he created with the score.
Conclusion: The final installment in the "Resident Evil" saga will not leave a good impression overall. Bad plots might be expected in films like these, but when they muck with the action, they've drained what little fun could be had at all.
Rating: 2.5 out of 5 (Hubby's Rating: Better for Matinee.)
Posted by Gloria Oliver at 10:24 PM