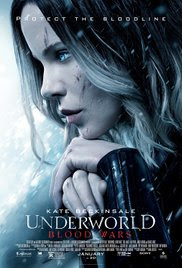 Starring: Kate Beckinsale, Theo James, Tobias Menzies, Lara Pulver, Charles Dance, James Faulkner, Peter Anderson, Clementine Nicholson, Bradley James, and more.
Directed by: Anna Foerster Screenplay by: Cory Goodman Story by: Kyle Ward and Cory Goodman Based on Characters Created by: Kevin Grevioux, Len Wiseman, and Danny McBride Cinematography by: Karl Walter Lindenlaub Music by: Michael Wandmacher
Premise: Having lost her lover, daughter, and family, Selene feels she has no reason for living. Hunted by both werewolves and vampires as they seek her daughter for her blood, they won't believe her when she tells them she doesn't know where she is. Meanwhile, a new leader has risen amongst the werewolves. One whose been able to unite all the tribes and successfully destroyed a number of vampire covens. This could be the ultimate battle for both species. And Selene is once more stuck in the middle of it, whether she wants to be or not. (Rated R)
Review:
1) Acting - Total Thumbs Up: Kate Beckinsale reprises her role as the vampire Selene. Her dark, poignant looks are as sharp as ever. Theo James also returns as David. A young vampire Selene saved in the last film, he stands by her side whether she wants his help or not. Lara Pulver is pure gold as the manipulative Semira. Charles Dance and James Faulkner bring their strong presences into the cast giving it some weight.
2) Special Effects - Thumbs Up: A lot of effects fill the film. Most are quite nice. Several considerably gory.
The outside area of the northern stronghold, especially the frozen waterfall, was fabulous. The obfuscate skills from the north flowed quite well. And the vampire cocoons were a neat concept.
I couldn't remember from the previous films, but it seems that the werewolves in this franchise get less and less hairy with each movie. Hairless werewolves look less like werewolves and more like muscle heavy people with long muzzles. The vampires too seemed less than they should. They either had elongated teeth all the time or not at all.
3) Plot/Story - Neutral: At a mere 91 minutes, there's not much time for any real story development. Complications and backgrounds are served at breakneck speeds with no time to savor or absorb them. Character development is minimal. Lots of new enemies that just seem like more of the same because they're not given any real time to prove they're in any way different from the rest.
To increase the blood and carnage, both the werewolves and the vampires seem to lose a lot of their powers. Their sense of enhanced smell, strength, and more. A lot of wounds that should repair themselves in moments don't heal at all. (Not every blade would have poison on it.) The touch of the sun and the UV bullets now kill instantaneously. Selene and Varga's cage match showed potential for cool combat skills the vampires never once use on their werewolf enemies.
A lot of the motivations seem concocted and convenient. Without building the characters some of the things they do make no sense. Thomas knows Semira and her techniques, yet ignores what he knows and makes some of what follows hollow. Varga's explanations for his actions late in the film are completely belied by his previous actions, but no one seems to notice. (And when do you put someone in a room as a prisoner without removing all the weapons? As if this huge place wouldn't have a set of cells!)
It's also never good when you repeatedly tell the audience how impossible something is, and yet it's taken care of easily. Worse, once the vampires realize what has been done, they do nothing to correct the issue and get the benefit of added security instead of being massacred. Oh well.
4) Stunts - Total Thumbs Up: Lots of hand-to-hand combat. Sword fights, gun fights, and combinations of those and more. The choreography from the battles was overall well done.
5) Locations/Cinematography - Total Thumbs Up: The gorgeous vistas, especially when they go north, almost make up for the plot issues. The shots from the train over the mountains were fantastic! The frozen lake with the northern lights behind them was a beautiful sight. I loved the shots of the frozen waterfall.
6) Costuming/Makeup - Total Thumbs Up: Selene wears her signature corset, leathers, and long coat. Later things get shaken up a little with some contrast changes. All the southern vampires are emo to the max. It made for a huge contrast when we're introduced to the northern coven. A strange ying and yang effect. I loved the touch of Viking and Valkyrie influence on the northern group, especially for Lena.
Conclusion: If you love watching Selene kick buns, and some gorgeous cinematography, you'll enjoy the film. Just don't expect much else.
Rating: 3.25 out of 5 (Hubby's Rating: Better For Matinee)
Posted by Gloria Oliver at 10:04 PM