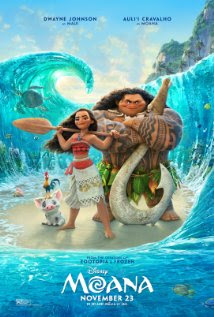 Starring: Auli'i Cravalho, Dwayne Johnson, Rachel House, Temuera Morrison, Jemaine Clement, Nicole Scherzinger, Alan Tudyk, Oscar Kightley, Troy Polamalu, Puanani Cravalho, and Louise Bush.
Directed by: Ron Clements, Don Hall, John Musker, and Chris Williams Screenplay by: Jared Bush Story by: Ron Clements, John Musker, Chris Williams, Don Hall, Pamela Ribon, Aaron Kandell, and Jordan Kandell Music by: Opetaia Foa'i, Mark Mancina, and Lin-Manuel Miranda
Premise: Moana has always been fascinated by the ocean and what might lay beyond the protective reef around her home. As the chieftain's daughter and heir, however, she tries to put those desires aside and learn how to become a good leader. But when pestilence and lack of fish begin to plague her island home, Moana realizes she must go and find the demigod Maui and get him to make things right again. (Rated PG)
Review:
1) Voice Acting - Total Thumbs Up: Auli'i Cravalho as Moana was a treat. Her boundless energy comes across in every line. Dwayne Johnson is a hoot as Maui. The two worked well together, and you could feel the bonds growing between the characters. Alan Tudyk as Heihei was a surprise, but what fun! (Especially as it isn't a speaking part.) Rachel House and Jemaine Clement added some additional angles to the scope of the film as well. (Clement's final line after the credits is awesome! :P)
2) Artwork/Animation - Total Thumbs Up: Walt Disney Animation Studios outdid themselves with Moana. The film is gorgeous! Fantastic textures, colors, and they do awesome things with the water. The section where Moana is at the beach as a baby was sublime. It will make you feel like you're actually in Hawaii.
A ton of attention to detail on all things. They use the 3D to full advantage, even making facial crinkles and wrinkles. Moana and Maui's hair would make anyone jealous!
Heihei fits the "too stupid to die" type character category. They have so much fun with him! Maui's tattoos are awesome. His mini tattoo version of himself is great. Like a living conscience. When Maui shapeshifts, stay on the lookout for the fishhook and how it's incorporated into each of his forms. Nice little detail. :)
The island goddess and the lava monster were excellent. The cooling lava and resulting igneous rock turned out fantastic. The monster zone and the Kakamoji peoples and boats were fascinating.
3) Plot/Story - Thumbs Up: While the film has the look and feel of Hawaii, after doing some quick research, it doesn't appear that the tale told has anything to do with the legends of the chain of islands. Despite that, it does hold a lot of the trappings of stories dealing with humans and gods. It also definitely has a Hawaiian feel to it.
A lot of themes run through the film. Responsibility, dreams, finding who you are, and more.
The film uses some anachronistic terms/dialogue. But though out of place, some of it is quite humorous. Several in-jokes are tucked away here and there. For example, Maui moving his mini tattoo from one side of his chest to another by muscle movement. A move we've seen Dwayne Johnson do in other films. :P (There's a big in-joke at the end of the credits, too! Relates back to the Little Mermaid. :))
Conclusion: Moana is a gorgeous film. Would recommend seeing it in 3D for the spanning views alone. Lots of fun moments and has plenty to keep the kids and adults well entertained.
Rating: 3.75 out of 5 (Hubby's Rating: Worth Full Price of Admission)
Posted by Gloria Oliver at 5:05 PM