Movie Review - Fantastic Beasts and Where to Find Them

Fantastic Beasts and Where to Find Them 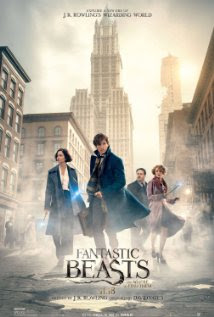 Starring: Eddie Redmayne, Colin Farrell, Katherine Waterston, Dan Fogler, Samantha Morton, Ezra Miller, Alison Sudol, and more.
Directed by: David Yates Written by: J. K. Rowling Cinematography by: Philippe Rousselot Music by: James Newton Howard (Main Theme by: John Williams)
Premise: A socially awkward wizard from Brittain comes to New York on an errand. Unbeknownst to him, there is a lot of unrest in the city as various unexplained phenomena have the citizens growing ever more alarmed. This, in turn, has raised tensions amongst the wizarding world as they fear they'll be exposed to the no-mags (muggles) - something that could very well lead them to war. (Rated PG-13)
Review:
1) Acting - Total Thumbs Up: Eddie Redmayne was adorable as Newt Scamander. Despite his awkwardness around people, it's fun watching him get pulled out of his shell by a most unexpected acquaintance - the muggle Kowalski. Dan Fogler does a great job as Kowalski. The audience shares his wonder and awe as he's shown the secrets of the wizarding world. Watching his relationship shift and change with Newt, Queenie, and the animals is a lot of fun. And he'll steal your heart when you're not looking. Katherine Waterston as Tina did a great job as well. Her focus shifts and changes as she follows her heart despite all she's done to do the exact opposite. Alison Sudol as Quennie added a lot of charm and a smile with a ton of wattage. Colin Farrell was slick and oily as the head Auror Graves.
2) Special Effects - Total Thumbs Up: The special effects for the film were lovely. All the creatures were fascinating, and several tried to steal the show. :) Lots of creativity went into them. Some resembled familiar animals while others were different from anything seen before.
The inside of Newt's suitcase was a wonder all by itself. Somewhat like the owner, a shabby exterior holding endless wonders within.
Several cool sequences of repair magic. The cooking scene in Tina and Queenie's apartment was super neat and warm.
The rebuilt New York of the late 20's looked fantastic. And expect even more once you go into the wizards' government building!
3) Plot/Story - Thumbs Up: The film contains all the things we've come to know and love about J.K. Rowling's universe. Loveable underdog characters, sinister plots, hidden social commentary.
The film explores multiple themes. The disappointing second child, social awkwardness, being taken advantage of, getting condemned without being heard or understood, and more.
A ton of red herrings and several surprises abound. Watching the chaos and funny antics by Newt's charges are half the fun.
4) Locations/Cinematography - Total Thumbs Up: Awesome work on all the locations real and imagined. Beautiful shots of the city, underground areas, central park and more. I loved the recreation of the New York Zoo. The shots inside the wizarding building were also quite amazing. The varied fake worlds inside Newt's suitcase, even more so.
5) Costuming/Makeup - Total Thumbs Up: The hair styles, the clothes were all very 20's. Great job with the look and feel. The makeup work on Credence Barebone and Grindelwald were very apt and creepy as well. :P
Conclusion: Fantastic Beasts and Where They Come From is a great addition to the Harry Potter Universe. Strong enough to stand on its own as well. Very enjoyable.
Rating: 3.75 out of 5 (Hubby's Rating: Worth Full Price of Admission)
I would also highly recommend the movie "Arrival" - got super dizzy from a bad case of sinus so didn't get to post a review! Great SF!
Posted by Gloria Oliver at 10:16 PM