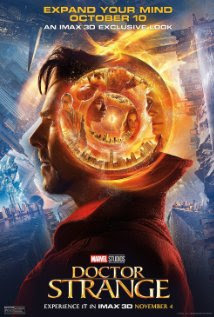 Starring: Benedict Cumberbatch, Chiwetel Ejiofor, Rachel McAdams, Tilda Swinton, Mads Mikkelsen, Benedict Wong, Michael Stuhlbarg, Benjamin Bratt, and more.
Directed by: Scott Derrickson Written by: Jon Spaihts, Scott Derrickson, and C. Robert Cargill Based on the Comics by: Steve Ditko Cinematography by: Ben Davis Music by: Michael Giacchino
Premise: A world famous surgeon loses the use of his hands after a terrible car accident. Determined to find a cure, he eventually ends up in Kathmandu, Nepal where he meets the Ancient One. Driven to succeed so he can go back to his old life, Strange finds himself embroiled in a conflict that could well decide the fate of the planet. (Rated PG-13)
Review:
1) Acting - Total Thumbs Up: Benedict Cumberbatch did a great job as Doctor Stephen Strange. Cumberbatch took the character and made it his own. Though he's played many roles with ego filled men with hearts they deny, he still found a way to make Strange unique from all his other performances. Kudos! Tilda Swinton  was quite convincing as a female version of the Ancient One. Mads Mikkelsen was wonderful as Kaecilius. His conversation with Strange in the NY Sanctum was wicked and fabulous on so many levels. Not to be outdone, Chiwetel Ejiofor holds his own as Mordo. (For those who know the comic series, they do push him in the right direction by the end, so go with it.) Benedict Wong (I swear they made an in-joke of the fact they had two Benedicts) was a perfect and fun foil for Strange. Rachel McAdams was fun as Christine Palmer. Her reactions at a couple of places were priceless! :)
2) Special Effects - Total Thumbs Up: If you can possibly see this film in IMAX 3D I would urge you to do so! I get motion sickness easily, but didn't have trouble with the film, so I think it should be safe for most people. All the warping of reality looked spectacular!
The special effects team also handled a silent actor who just about stole the show - the Cloak of Levitation. Totally unexpected handling of the ancient artifact and it worked so well! Loved what they did with it!
The mirror universe, Dormamu's universe, and all the weird manipulations of reality were fantastic. Dormamu himself, which you get a hint of during Stephen's first introduction to the unknown, looked fabulous! Wish we'd gotten a look at the Mindless ones, but I'm sure they're saving those for later. :P
The spells themselves were super cool. The physicality added to them made them seem more real, which added more to the film than just straight visual effects would have. Awesome choice.
The Eye of Agamotto doesn't much resemble the iconic image used in the comics, but was still very cool. And wait untill you see the astral fight through the hospital! Fab!
And wait till you see what they do with the apple. Fantastic! And the backwards while still going forward combat was sublime!
3) Plot/Story - Total Thumbs Up: This is an intro story and most of the important facts fit with the stated mythology from the comics. Doctor Strange is hubby's favorite all time comic book hero so he's been slobbering to see it. :P And he was quite happy with the treatment.
Three major changes from the comics  were in the film. The Ancient One is now female - though it was pulled off quite nicely. The second was the introduction of Kaecilius as Stephen's first nemesis. But that's only so they could build up what they'll be doing with Mordo later. Bwahahahaha! (Ahem...) The third was the addition of Christine Palmer into the origin story. But she made for a nice counterpoint with Strange. In essence, all the best parts of what make up Doctor Strange were definitely there.
The film had a lot of interspersed humor. It was quite a surprise, but it added a nice layer of fun to the film.
4) Stunts - Total Thumbs Up: Between the training, the fighting and the effect of magic on others - the stunt team was kept very busy. Fights weren't on just the usual planes of existence anymore. This made for some challenging hand to hand combat! Even escaping was a major stunt trial. lol.
5) Locations/Cinematography - Total Thumbs Up: Both the real and the imagined locations were great! They had great flavor. They even used a couple of places where you saw one thing, but heard another, throwing the whole into a new context. What fun! Filming occurred in the real Kathmandu, Nepal. Also in Hong Kong, London, New York, Los Angeles and more. The addition of the Avenger's tower outside of Stephen's view was a nice touch.
And wait till you see the New York Sanctum. Sweet!
6) Costuming/Makeup - Total Thumbs Up: Major kudos to the makeup department, Benedict Cumberbatch, and the special effects group with respect to Stephen's messed up hands. There was no doubt in anyone's mind that they weren't the same as they'd been when he wakes up in the hospital after the accident. And later you can see the scars from the repairs and additional surgeries he had performed in an attempt to get them fixed. A constant reminder of his loss.
The group also did a fabulous job recreating Strange's unique look from the white in his hair to the blue gi like uniform. Great attention to detail!
Conclusion: Doctor Strange is an awesome rendition of the famous comic series. Fans will be please with how technology has finally caught up enough to bring this fabulous character to the world in the right way. There are two (yes two!) extra scenes during the credits. So stay all the way to the end! Stan Lee also has a cameo! (I know - like DUH!) :P
Rating: 4 out of 5 Stars (Hubby's Rating: Worth Full Price to See Again!)
Posted by Gloria Oliver at 7:55 PM