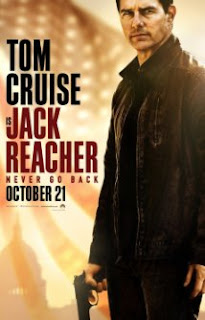 Starring: Tom Cruise, Cobie Smulders, Danika Yarosh, Aldis Hodge, Patrick Heusinger, Holt McCallany, Madalyn Horcher, Robert Catrini, and more.
Directed by: Edward Zwick Screenplay by: Richard Wenk, Edward Zwick, and Marshall Herskovitz Based on the novel by: Lee Child Cinematography by: Oliver Wood Music by: Henry Jackman
Premise: Jack starts having phone conversations with Major Turner after a successful sting. He invites her to dinner and makes his way to D.C. to meet her face to face. When he gets there, however, he finds out she's been removed from her post. She's been placed in jail while waiting to be tried for treason. Something about this doesn't seem right. Reacher becomes sure of it when he finds himself being tailed. (Rated PG-13)
Review:
1) Acting - Total Thumbs Up: Tom Cruise reprises his role as the loner, ex-military man, Jack Reacher. As always, he's a lot of fun to watch. Love all his little telltale expressions. Getting caught between Turner and Samantha made for a lot of amusing scenes. Cobie Smulders as Turner had some nice back and forth chemistry with Tom. Both characters are quite set in their ways and are a bit like mixing oil and water. Making the mix even more chaotic is Danika Yarosh who plays Samantha. Her character reflects facets of both of the two as they all go on the run.
2) Special Effects - Total Thumbs Up: This is an action film, so bullets and explosions are pretty much a must. Great job by the special effects team on all of them. Especially memorable was the scene at the warf. A ton of lead flying everywhere!
3) Plot/Story - Thumbs Up: I've not read the Jack Reacher book the film is based on, so apologies for not being able to give any opinions between the two. I have read one of the other books and enjoyed it quite a bit! Just need to find time to read more. :)
For once the previews did not reveal all! There's an added and unexpected element thrown into the plot they didn't give away. This added a different dynamic which for ends up prodding Reacher out of his comfort zone. While this particular complication is not new in the plot world, it made for a nice surprise. Especially since sneakily kept it out of the previews. Yay!
Action films do tend to let a few things slide so things will work out how they want. So there are a couple of bits. Sticky details like stewardesses and airport security. But they blank them out in such a way you don't realize it for the most part.
The pace is fast and slows down very little throughout.
Samantha is super street savvy yet also conveniently clueless. But it's so much fun watching Jack having to deal with the unexpected situation that it's easy to ignore the convenient manipulation.
4) Stunts - Total Thumbs Up: The film has lots of lovely hand to hand fights and on foot chase scenes. Major kudos for the kitchen fight scene. The rooftop chase/fight was painful and awesome!
5) Locations/Cinematography - Total Thumbs Up: Lots of nice cinematography. Loved the wide overhead shots of Turner and Reacher running in several scenes. New Orleans was a great venue for the last section of the film. Especially with the Halloween parade and fireworks. The closeup shots, especially during the last scenes, made them even more poignant.
Conclusion: Jack Reacher: Never Go Back is a fun ride. Full of mayhem and chaos, we get a lot of action scenes and close combat. Watching Jack squirm emotionally though? Priceless. :)
Rating: 3.75 out of 5 (Hubby's Rating: Worth Full Price to See Again)
Posted by Gloria Oliver at 9:47 PM