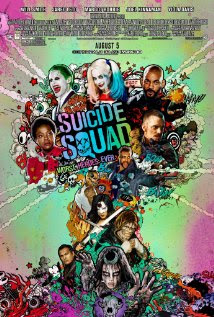 Starring: Will Smith, Margot Robbie, Viola Davis, Jay Hernandez, Adewale Akinnuoye-Agbaje, Cara Delevingne, Joel Kinnaman, Jared Leto, Karen Fukuhara, Ben Affleck, and many more.
Directed by: David Ayer Written by: David Ayer Based on the comics by: John Ostrander Cinematography by: Roman Vasyanov Music by: Steven Price
Premise: After Superman's disappearance, there's been a growing concern. What if someone like him reappears. A super human who didn't care to play by the rules and decides to become a terrorist. Amanda Waller has a solution. Use a handful of dangerous, imprisoned felons to run covert operations. Expendable people who could be used to take out metahuman threats. And she's found a way to make them cooperate, whether they like it or not. (Rated PG-13)
Review:
1) Acting - Total Thumbs Up: Viola Davis proves once again why she is such a consummate actress. Her portrayal of Amanda Wallen is chilling. Will Smith showed multiple facets for the talented Deadshot. But it is Margot Robbie as Harley Quinn who steals the show. Her scenes with Jared Leto, who plays the Joker, have all manner of lovely subtext. :) Theirs is a complicated relationship to the extreme. :)
2) Special Effects - Total Thumbs Up: The special effects were outstanding. And it was the little things that really ramped them up. The smoke and burning embers around the Enchantress. The beautiful dancing fire figures created by El Diablo. The gooey remains left during the brother's attacks. The one scene where the changed man's head undulates. Lots of wonderful little details.
And Deadshot's assassination and later his gun play show - awesome!
On a larger scale: we get lots of explosions, crashing helicopters, and a super cool looking magical death machine. The obligatory column of light and ring of matter looked fabulous! And wait till you see what El Diablo can truly do when he lets loose. :)
3) Plot/Story - Thumbs Up: Many of the characters who belong to the Suicide Squad I was already familiar with and others not so much. While the film does try to get the audience acquainted with most of the members; they do so in a briefing type style. Yet because of the number of members, it slowed the pace of the film quite a bit.
The "object lesson" character didn't get introduced much at all. Might have had more impact if they had - but they did already have their hands full. This is one of the biggest problem with films where you have a lot of headliners. Someone will lose out - be it the characters or the plot. And sometimes it's both.
Several themes and objects of "food for thought" are brought to the table. Mankind's duality, family, how adversity brings all sorts of people together. The different facets of love, and how it can free you or enslave you. Even how evil can come from all sorts of sources and in all sorts of ways.
And sadly, the previews give away almost all of Harley Quinn's lines. :(  (Though they got her so right! Mr. J, Pudding, even the hammer. Lol.)
I do have to say that since June Moone is now an archeologist - she sure didn't act like one. She would have been kicked out of academia for willfully destroying the priceless artifact that got her into so much other trouble. *sigh*
No real surprises in the plot. Once it gets going it speeds along pretty well. And make sure to stay through the first part of the credits for a couple of more important minutes!
4) Stunts - Total Thumbs Up: There are a ton of stunts pretty much throughout the entire film. From fighting the inmates to fighting the bad things. Lots of close combat with guns, bats, fists, katana, and boomerangs. Almost too much stuff to follow all at once. :)
5) Costuming/Makeup - Total Thumbs Up: Some great makeup work in the film. El Diablo's tattoos were everywhere and looked fab. Harley's white skin and her funky eye and hair makeup were great. The Joker was also a fun bit of work. The tattoo on his hand of the laughing mouth was too fun! And let's not forget Killer Croc! The face getup and teeth were amazing. The Enchantress (despite her being a different take than in the comics) looked awesome as well. Super creepy. :)
Conclusion: "Suicide Squad" is a bit top heavy at the start, but still quite fun. No real surprises. Most of the snappy one liners have already been revealed. Yet it was still entertaining overall. Stay through the first half of the credits!
Rating: 3.25 out of 5 (Hubby's Rating: Worth Full Price to See Again!)
Posted by Gloria Oliver at 11:18 PM