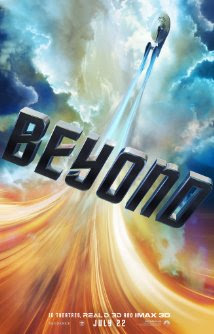 Starring: Chris Pine, Zachary Quinto, Karl Urban, Zoë Saldana, Simon Pegg, John Cho, Anton Yelchin, Idris Elba, Sofia Boutella, Joe Taslim, Lydia Wilson, and more.
Directed by: Justin Lin Written by: Simon Pegg and Doug Jung Based on the series by: Gene Roddenberry Cinematography by: Stephen F. Windon Music by: Michael Giacchino
Premise: Three years into their five year mission, Kirk is wondering if he doesn't need a change. While visiting the new Yorktown space station, the Enterprise gets an unexpected mission. They are tasked to go rescue a stranded crew in an uncharted nebula. But the mission turns out to be something else entirely. (Rated PG-13)
Review:
1) Acting - Total Thumbs Up: The gang is back! And Karl Urban is too awesome. lol. I do love me some Dr. McCoy and he is so good at it! lol. Chris Pine does a nice job showing Kirk's drifting as he internally loses his way. Zachary Quinto continues to deliver those great flat line punche. And also we get some surprises from him as well. Anton Yelchin truly puts his stamp as Chekov this time around, which will make us miss him all the more. Sofia Boutella adds a nice extra layer as Jaylah.
2) Special Effects - Total Thumbs Up: Some amazing stuff this time around with the special effects. Yorktown is super cool. Though I wish they'd slowed down the fast panning when we get our first look - it went way too fast. Which is a pity since it was so awesome! Let us enjoy your work!
Kudos on making the bad guys' blasters/energy discharges look different. The energy had a funky shape, which was neat. The buildings and machinery of the ancient dwellings were rather neat. They definitely spoke of it being a different culture.
Though they were all still humanoid, we did get to see a whole range of new species in the film, which was awesome. I could not take my eyes off of Tyvanna and her cauliflower like layered head.
The swarm ships were rather nifty and looked cool. They way they were employed was rather brilliant. The Federation needs to get ahold of this metal!
If you see the film in 3D, the credits are a super treat as they show different planets, nebulas, and other gas fields. (Keep your eyes peeled for the giant green hand! I kid you not! lol) Lots of lovely work throughout the film.
3) Plot/Story - Thumbs Up: I've pretty much given up on the science making sense in this franchise anymore, so I don't even try. So if you can turn that part of your brain off, the film can be quite enjoyable.
This is the film that bridges the old with the new. It's like we are at the cusp of them being at the point where we first meet them in the original series. They merge the new theme music with the old theme music even more than in the past. Snippets and lines get thrown in that are well known and even in-jokes allude to the old series. And at the end they wrap it up with those words we all know so well.
Kirk and Spock finds themselves at a cross-roads. It is for different reasons, yet the decisions they are poised to make can change everything. Kirk's ends up resonating as a recurring theme for several characters and even the main plot. There are some unexpected layers to why things are happening. So some things will seem odd until the explanations finally reveal what is not yet known.
4) Stunts - Total Thumbs Up: Lots of phaser combat on the ship and on the planet. Explosions, gravity shifts, and more get people thrown all over the place. Nice job!
5) Locations/Cinematography - Total Thumbs Up: As I mentioned earlier, they took the pan views of Yorktown way too fast. For the rest of the shots, however, you get some great views of the areas. The shots in space of the hive, the station, and the general mayhem in the first attack were fabulous.
Conclusion: Star Trek Beyond ties the old and new together. They still have issues with bad science. But if you can ignoring those, the film moves well and has plenty for audiences to enjoy. Some lovely in-jokes too!
Rating: 3.5 out of 5 (Hubby's Rating: Worth Full Price to See Again)
Posted by Gloria Oliver at 10:07 PM