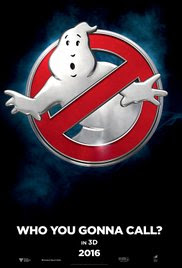 Starring: Kristen Wiig, Melissa McCarthy, Kate McKinnon, Leslie Jones, Chris Hemsworth, Neil Casey, Karan Soni, Bill Murray, Ernie Hudson, Dan Aykroyd, Sigourney Weaver, and more.
Directed by: Paul Feig Written by: Katie Dippold and Paul Feig Based on the film written by: Dan Aykroyd and Harold Ramis Cinematography by: Robert D. Yeoman Music by: Theodore Shapiro
Premise: Erin Gilbert is on the cusp of gaining tenure at her university when the past comes back to haunt her. An old colleague has republished the paranormal book the two of them wrote together. A book that might cost her everything, as it isn't seen as being real science. Trying to get Abby to take the book off the market, Erin ends up going with her to a historic house in New York. And comes face to face with the supernatural. (Rated PG-13)
Review:
1) Acting - Total Thumbs Up: One of the things that made the original 1984 Ghostbusters film fun were all the quirky and memorable characters. The new film has a basket full. Kriten Wiig did well as the socially awkward and insecure Dr. Erin Gilbert. Melissa McCarthy was fun as the gutsy Abby Yates. While hard to out do Egon, Kate McKinnon did things her own way as the unique, happy-go-lucky Jillian Holtzman. Chris Hemsworth had way too much fun as Kevin, the brainless, and I mean brainless, receptionist. lol. Bill Murray as the debunker Martin Heiss was a brilliant choice for a multitude of reasons.  And a lot of the original cast is back for some awesome cameos too!
2) Special Effects - Total Thumbs Up: If you get a chance to see the film in IMAX 3D, I would definitely recommend it. The special effects are well worth the higher price. The first and second ghosts were super detailed and the 3D made their lack of a corporeal body that much cooler to look at.
Lots of great gadgets and fun looking machinery. Rowan's machines had a strong steampunk feel to them. Our favorite proton streams are back and used in all sorts of new ways.
There's lots of slime and even Slimer! He has a grittier, more substantial look, and he still knows how to party. The balloon ghosts were creepy. And Rowan's mirrors were fab!
3) Plot/Story - Total Thumbs Up: The original Ghostbusters film is one of my husband's all time favorite movies. He's been frothing to go see it. And was quite happy with the results.
A lot of the main players in the original cast do cameos in the film! Awesome! And what's really neat about the cameos is how they have more substance to them than you normally get from such things. A tons of in-jokes in those little snippets as well. Sadly, Harold Ramis passed a couple of years ago, so he did not get to appear. Though a bust of him shows up in one of the scenes. It was a nice touch.
Like in the original, the story begins with a paranormal incident. The build up to it was great. Not only is the tour guide full of bizarre commentary, but he's also a charlatan of sorts, until... (That whole beginning sequence was great!)
From the moment the film starts there are 'winks' and 'nudges' heralding back to the original film. They were made up of all kinds of bits - visual, vocal, and musical. If you loved the first film, you'll love this one just for all the awesome homage!
Though the story parallels the original in certain aspects. (It even pokes fun at it.) It's also a whole new tale on its own. A lot of themes get thrown in to go along with the humor and nostalgia - friendship, family, as well as daring to believe in yourself and others.
Stay all the way through the credits! Not only were they a blast, but several more bits are throw in. The last, if you've seen the original, was priceless! Speaks of possible things to come. :)
4) Stunts - Total Thumbs Up: Lots of great gags. Felt sorry for the people dealing with the 'Saturday Night Fever' pose. lol. Bodies get thrown around, and there's even some hand-to-hand.
5) Locations/Cinematography - Total Thumbs Up: The original Ghostbusters was filmed for the most part in New York. This time around, they recreate several places in NY City, but most locations are actually in nearby Massachusetts. Even so, we got some lovely scene sweeps and neat shots.
6) Music - Totally Thumbs Up: They sneak in the original theme here and there. The first time gives a great jolt of nostalgia when they bring it in right after the starting sequence. The snippet of new songs and background music all worked quite well.
Conclusion: Despite all the negativity before the film's release, hubby and I loved the heck out of it. A ton of homage bits and all the awesome cameos added a lot to the film's overall fun. Sit through all the credits! They're a ton of fun and have more added bits. :)
Rating: 4 out of 5 (Great visuals and all that homage! Woot!) (Hubby's Rating: Worth Full Price to See Again.)
Posted by Gloria Oliver at 9:57 PM