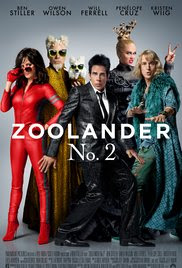 Starring: Ben Stiller, Owen Wilson, Will Ferrell, Benedict Cumberbatch, Penélope Cruz, Kristen Wiig, Milla Jovovich, Billy Zane, Cyrus Arnold, Justin Bieber, Sting, Kiefer Sutherland, and many more.
Directed by: Ben Stiller Written by: Justin Theroux, Ben Stiller, Nicholas Stoller, and John Hamburg Based on Characters Created by: Drake Sather and Ben Stiller Cinematography by: Daniel Mindel Music by: Theodore Shapiro
Premise: After the death of his wife and loss of custody of his son, Derek Zoolander hid himself away from modeling and life. He's brought back into the modeling scene after Billy Zane delivers an invitation from the current fashion diva, Alexanya Atoz, to come to Rome. Dealing with his own issues of a scarred face and the possibility of his being a father, Hansel receives the same invitation. Yet all is not as it would appear, as a rash of deaths in the music industry and cryptic photos by the murdered victims lead interpol fashion police officer Valentina straight into Zoolander's path. (Rated PG-13)
Review:
1) Acting - Total Thumbs Up: I've yet to see the original Zoolander (my bad), but it was obvious from the start that everyone, from the main leads to the zillion cameos, that everyone had a ball being a part of this film. And while I heard there was some unhappiness from fans with regards to Benedict Cumberbatch playing All, I am not sure why they were displeased. He was fabulous in the role! And looked to have enjoyed every moment of it. He was perfect for the character. And his sweeping in to whip two Mork from Ork clones with vengeful fashion wrath was hilarious! (Wished they'd let him do more! :P)
2) Special Effects - Total Thumbs Up: They did some very 80's and also some cool futuristic looking effects in the film. Interpol was super high tech - loved the screens. There was also a lovely chase scene with some Matrix like hijinxs to grab our attention from the very beginning that were nicely done.
The jail for the criminally fashion insane was a giant thimble and needle - genius! And the prison cell holding Mugato was outstanding.  Several of the locations got spruced up with special effects magic so you got a combination James Bond and 80's MTV video effects here and there. :)
3) Plot/Story - Thumbs Up: I'd heard of Zoolander and learned about the Blue Steel look when all the celebs were doing it. But I'd not gotten around to seeing the first film. That being said, anyone who hasn't seen it doesn't need to worry about not knowing what's going on as they do a nice quick recap and even fill in the intervening years to throw wrenches for the upcoming plot.
Zoolander and Hansel go on a true trip of discovery - one to help them find out who they are and also what others mean to them. Rolled up in this are the themes of family, connecting, and acceptance. And of course 'looking cool' and what that really means.
No real surprises on the plot, but with the lack of mental capacity from the heroes, they couldn't make it too hard on them. lol. My two favorite spots were the beginning James Bond like sequence and the scenes with All. And Keifer Sutherland is pregnant?
There are all sorts of in-jokes thrown all over the place as well. Trying to catch them is rather fun. :) Oh, and the whole serving tea with the feet scene? Awesome! :P
4) Stunts - Total Thumbs Up: Some physical and some CGI stunts. This is a comedy so some bits go beyond human boundaries, but that's part of the fun. (Who knew Will Ferrell was so flexible?) And one of the longest car rolls EVER!
5) Locations/Cinematography - Total Thumbs Up: From the desert outside Malibu to the Northern reaches of New Jersey, they really picked some great locations for the film. All the spots in Rome were fantastic. And the views!
Heck, even the weird locations like the dolled up medicine factory/toxic waste dump/fashion party were nicely done. Lovely cinematography.
6) Costuming/Makeup - Total Thumbs Up: Loved loved loved the Dr. Strange look they gave Zoolander when we find him in his hermitage in the cold north! Hansel's quarter mask was also adorable. Make note of his scar after the first look and see what/who it reminds you of. :)
And the amazing (and horrifying) things they did to Kristen Wiig! OMG! Creepiest looking character ever! lol. I swear there were several characters from some old movies squished together to make her up. (Dug back up?) :P
And since the film is about models, there are costume changes for just about every scene! Having to come up with all these clothes must have driven the wardrobe people crazy. Using tattoos as part of Hansel's costumes was a great move.
7) Music - Total Thumbs Up: I have to say half of my enjoyment of the film was from the great background score by Theodore Shapiro. A very spy/thriller type sound with lovely changes for different areas that set the perfect mood from the start. :)
Conclusion: Can't say if it is better or not than the original Zoolander, but Zoolander 2 was fun. Everyone looked to be having a ball. So if you're looking for something silly, light, and very well done with cool locations, look no further. Zoolander 2 will take you there. :)
Rating: 3.5 out of 5 (Hubby's Rating: Better for Matinee)
Posted by Gloria Oliver at 11:06 PM