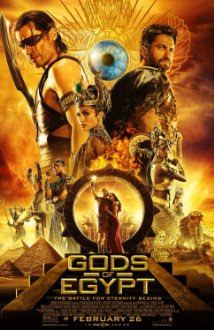 Starring: Brenton Thwaites, Courtney Eaton, Nikolaj Coster-Waldau, Gerard Butler, Elodie Yung, Chadwick Boseman, Rufus Sewell, Bryan Brown, and many more.
Directed by: Alex Proyas Written by: Matt Sazama and Burk Sharpless Cinematography by: Peter Menzies Jr. Music by: Marco Beltrami
Premise: In ancient Egypt, the gods walked the earth. As Osiris prepares to hand over the kingdom to his son Horus, his brother Set has other plans. And it is the humans who will pay the greatest price. (Rated PG-13)
Review:
1) Acting - Total Thumbs Up: Brenton Thwaites is fun as the plucky mortal, Bek. Nikolaj Coster-Waldau was perfect for the role of the spoiled prince and later the bereaved god Horus. Gerard Butler brought a nice manic intensity to his portrayal of Set. Courtney Eaton was adorable as Zaya, with Elodie Yung as a very independent Hathor.
2) Special Effects - Total Thumbs Up: Lots and lots of CGI and fun effects in this film. Egypt is amazing to behold! All the locations depicted were full of detail. There are a ton of little touches that tie back to individual gods giving them their own little bits - like Set's chariot being pulled by giant Egyptian beetles or Hathor's flying carriage pulled along by flocks of birds.
To make sure viewers can tell the difference between the gods and the mortals, they did a size difference thing similar to what was done for the Lord of the Rings films but bigger. Makes for some neat visualizations when the gods and mortals interact together. And gods bleed gold!
Some of the most amazing visuals were simple, and made all the more awe inspiring because of it. The high peak with the large ring shaped like the sun. The dried out gardens belonging to Osiris, and the brief glimpse of what they'd been like as Horus recalls it to his memory.
The transformations and cool weapons were nicely handled. The creatures and traps were great. Lots of food for the eyes in this one.
3) Plot/Story - Thumbs Up: A piece of the basic premise/plot comes from actual Egyptian mythology. The stories of old are based on how at one time the gods did walk the earth with mortals. As in the mythology, Osiris is murdered by Set and split into 14 pieces, though Isis did not give birth to Horus until after she'd put her husband back together again. So while some details have been tweaked for convenience, there is still a bit of the old legends in there.
I liked their take on the core of a god's power being an object. Made for some interesting twists as things moved along.
Jealousy, love, light and darkness, loss, revenge, wisdom -- all themes common in many old and new stories. And they still managed to sneak an unusual spin here and there. This is an adventure, so it is pretty simple and straight. Set obviously spent way too much time in the desert and it fried his brain. But it still made for a fun ride.
4) Stunts - Total Thumbs Up: Mostly CGI, we still got some smacking and throwing around of actual people. The two were integrated very well, making for several fun battles. Even the giant snakes fit right in. :)
5) Locations/Cinematography - Total Thumbs Up: If I had one complaint about the cinematography, it would be that they didn't let us see enough of some of the locations! I wanted more of a tour of some of these place! :) The sweeping images of the prosperous capital were lovely. Horus' temple was a gorgeous work of dark stone. The summit where Horus goes to pray to Ra was awesome in its grand simplicity.
6) Costuming/Makeup - Thumbs Up: Strangely, I thought they 'dropped the ball' a little with the costumes. While Bek's and Horus's costumes fit overall (and Thoth's!), and they had neat head coverings/hats that looked wonderful, the women's clothes, especially Hathor's, seemed totally uninspired. :( Even the head builder was dressed better and more fitting of the theme than most of the ladies. made me sad. :(
7) Music - Total Thumbs Up: The score by Marco Beltrami fit perfectly. Gave the film a theme of its own, yet filled it full of the sounds we think of belonging to ancient Egypt.
Conclusion: Gods of Egypt is a lovely visual fantasy. A fun adventure of mortals and gods.
Rating: 3.75 out of 5 (Hubby's Rating: Worth Full Price of Admission)
Posted by Gloria Oliver at 11:29 PM