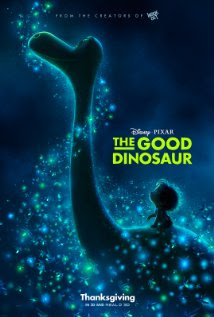 Premise: On an alternate timeline, where the giant asteroid missed Earth 65 Million years ago, dinosaurs continue to exist to develop language, civilization, and other skills. Three young dinosaurs hatch on a farm to live and grow with their Momma and Poppa, where they grow corn and raise chickens. While Libby and Buck prove quite apt for the life there, Arlo has problems. Trying to help him, Poppa gives Arlo the job of catching and killing the critter who's been stealing from their corn stores, otherwise they might not have enough food saved for the winter. But things don't go as his Poppa had hoped. (Rated  PG)

1) Voice Acting - Total Thumbs Up: Raymond Ochoa and Jack Bright are adorable as Arlo and Spot. Sam Elliot was perfect for Butch. His character was a neat surprise along with Nash and Ramsey. Jeffrey Wright and Frances McDormand were great as Arlo's Poppa and Momma. Peter Sohn as Forrest Woodbush, the crazy old hermit triceratops, was a total hoot. :)

2) Artwork/Animation - Total Thumbs Up: I didn't think it possible, but Disney and Pixar have pushed animation up another notch. From the first scene of the film to the last you'll be trying to remind yourself the backgrounds are animated because they look so completely REAL! The seamless integration of the characters into their environment shows they must be animated; but you'll still find yourself not believing it. Honestly, the realistic quality of the environment was a total jaw dropper! The reflections, the detail, I was flabbergasted!

The dinosaurs and other critters are easily identified as animated, and looked great. Lots of lovely expressions and other visual cues. Good textures for the reptilian skins and more. Everything around them though is so amazing, it makes you wonder if Pixar was afraid of doing the same with the characters, so that the drama might become a little too  real for young viewers.

The realism of the scenery make for some amazing cinematography! The two scenes with fireflies are utterly wonderful. :)

3) Plot/Story - Total Thumbs Up: Think of the movie as dinosaurs meet Little House on the Prairie meet Bonanza and you'll have the general feel of the film. It's definitely a coming of age story and seems aimed more at the tween age group than the younger kids, though there's enough going on to keep them interested as well, even if they don't get everything being presented.

It was a lot of fun to see the dinosaurs as the civilized species. The human boy, Spot, has reasons for being wild but even then his ingenuity and intelligence shine through, showing humans are still in the game despite the meteor missing the planet. :P The swap between roles, though, was a lot of fun. And that isn't the only surprise they've prepared for us either. (Arlo and the chickens are a hoot!)

So though the story itself will be familiar, the trappings and stage settings make it fresh. It was also very well done besides. Major themes are about family, belonging, finding your true self, and being open to experiences. There are several poignant moments, so if you're like me, make sure to take a handkerchief or two.

Conclusion: The Good Dinosaur is visually fantastic! The animation of the surroundings is so detailed you'll swear they're real. Well worth it just for that alone! The short for the film is called Sanjay's Super Team and it is super adorable!

Saw two other films this week, but won't have time to do full reviews - so here goes:  Mojin - The Lost Legend:  (Combo of Indiana Jones and Tomb Raider) cool effects. Story a little disjointed, but still fun if not looked at too closely. 3.5 out of 5. The Hateful 8: acting is awesome, cinematography as well, but plot had several issues. :( 3.0 out of 5.

Posted by Gloria Oliver at 6:55 PM