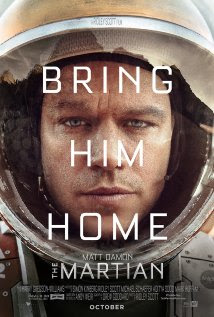 Directed by: Ridley Scott Screenplay by: Drew Goddard Based on the Novel by: Andy Weir  Cinematography by: Dariusz Wolski Music by: Harry Gregson-Williams

Premise: When the Ares III Mission on Mars is aborted due to a massive storm, Mark Watney is left for dead after being hit and swept away by a large antenna. Alone and stranded on the red planet, Mark tries to find ways to survive on what little he has left, knowing help is at least four years away. (Rated PG-13)

1) Acting - Total Thumbs Up: Matt Damon does an awesome job as the stranded, humorous and somewhat egotistical, Mark Watney. Strong performances from Jeff Daniels and Jessica Chastain. I also loved the little subtle bits of acting by Kate Mara. Donald Glover was a lovely treat as Rich Purnell.

2) Special Effects - Total Thumbs Up: From the burning wood chips to the amazing landscape of Mars, the special effects department did a fantastic job. The more we saw of the planet, the more awesome the work got. Make sure to pay attention to the skies too! Lots of little touches to proclaim we are not on Earth.

They also got to have some fun with disasters - from minor to large! And the first storm was just too darn cool! So much to love from the special effects teams! If you don't wince or cringe as Mark fixes himself after coming conscious on Mars... alone... you're not human. Heh heh.

And wait until you see the super cool dust devils and other neat weather phenomena. The views from space are awesome.

Not as visually stunning as Prometheus, but with a much better plot, so the tradeoff is so worth it. :P And the 3D adds a lot to the film.

3) Plot/Story - Total Thumbs Up: I've not read the novel the movie is based on yet, though my Mom and Richard totally adored it. Looking forward to that!

Movie wise, most of the plot is pretty straight forward and the ending no surprise. While much of the film is just Matt Damon alone, his little quips and jokes make watching him a lot of fun. The science is pretty solid, too, and they explain things so even laymen can understand but done in such a way they're not talking down to the audience. There's also enough politics and maneuverings back on Earth to add some nice tension.

The most fun though is seeing how inventive Mark and those back on Earth get in trying to solve all the different problems they keep running into. Some true ingenuity happens here.

Also impressive (and disturbing) were the visual hints of the effects on Mark's body from having to rough it on rationed food and his having to wear a spacesuit for weeks/months on end.

4) Stunts - Total Thumbs Up: Several lovely stunts, mostly at Mark's expense. Some real nice smooth maneuvering by Kate Mata on the Hermes. She made moving around in zero G seem like a ballet.

5) Cinematography - Total Thumbs Up: This film is definitely worth seeing on the big screen and in 3D. The awesome cinematography of Earth, space, and Mars is so totally worth it. Beautiful sweeping views of Mars from any number of angles. Some agle play was done as well with the closer views of the characters - wall mounted cams or those in the suits and vehicles made for some interesting perspectives, but not done so much or so long it becomes bothersome rather than neat.

Conclusion: "The Martian" is a gorgeous film with solid science and a ton of ingenuity. Definitely worth seeing in 3D.

Rating: 4 out of 5 (Hubby's Rating: Worth Full Price to See Again!)