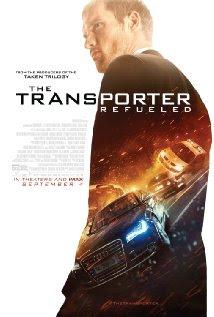 Premise: Hoping to spend some time with his newly retired father, Frank's plans take a detour after he ends up taking an impromptu job. Matters turn for the worse when he finds out his new client has decided she wants insurance, and kidnaps his father as leverage. The three rules no longer apply. (Rated PG-13)

1) Acting - Total Thumbs Up: Not as meaty as Statham, Ed Skrein still has the scruffy look and the attitude we've come to associate so well with regards to the Transporter movie franchise. Chris Vance is a more devonaire Transporter (from the TV series) - so Skrein fits neatly somewhere between the two. It's been fun watching their different interpretations of the same character.

Ray Stevenson was quite entertaining as Frank's father. He had way too much fun in the film - almost like he'd gone on holiday. Lol. Loan Chabanol had great chemistry with Skrein and the camera. Throughout the film you could see her admiration of the man she's hired and coerced grow. Lovely side glances from her.

2) Special Effects - Total Thumbs Up: What do we go see Transporter films for? The car chases, the hand-to-hand combat, the gun play, and if we're lucky, explosions! The film hit high marks on all these and more.

My favorite special effect had to be the driving maneuver that involved four different fire hydrants. A truly innovative move and with a touch of CGI and camera play it looked awesome. The way Frank disposes of one of his cars and then the trigger device made for some neat fireworks. The gun battle on the boat and all the exploding bullet damage was surreal.

3) Plot/Story - Neutral: Several people involved with the film have also been involved with some of the other films and even TV episodes. So the beginning scene is a familiar one for the Transporter franchise. There's always someone wanting to mess with Frank or his car in the parking garage. They never learn, but does make for a great mood setter.

There are a lot of other signature moments here and there in the film, so there's a lot of fun to be had by fans. And while no one expects this type of film to be highbrow, it was a little odd how on some things the writing was very bad, while on other things it was good.

So this will be one of those films to go see for the visuals, and leaving the little grey cells at home.

The first mistake has to do with the job itself. Even though the bad guy knew Frank in his army days, it seems odd he'd know Frank had become the Transporter, especially as Frank keeps his identity as secret as possible. And from the bad blood between them, I doubt Frank would have ever taken a job from them man or told him about his post army work.

The second would be the timing. From the girls you get the feeling they've been working up to this plan for years. But even assuming she knew who the Transporter was, there's no way Anna would have known anything about his father and when he was retiring/visiting early enough to incorporate him into her plan in this manner.

The third was making such determined ladies, who want nothing more than to leave the life, suddenly throwing themselves all over both Franks. It somewhat belittled all the trouble and the gazillion risks they'd been taking to put this plan together.

There's more booboos, but I will leave those to you to find. :) (Or to ignore. heh heh)

4) Stunts - Total Thumbs Up: The stunt department worked their buns off! Lots of car chases with a ton of imaginative car flips and crashes. You'll find yourself cringing at some of these, they look so nasty! Flips, flops, head on collisions, they've got it all!

Then we get into the hand-to-hand combat! Some quick camera moves here and there, but otherwise it's all right there for us to see. And Frank uses the tools he knows best - his car, his fists, and sticks. I utterly adored the fight down a small corridor with a wall of drawers on both sides. Talk about close quarters! And ingenuity too!

Big kudos to the stuntmen themselves as we see several motorcycle wipeouts and men skidding across the streets and into tables. They make it look so easy! :P

5) Locations/Cinematography - Total Thumbs Up: Shot in France, we get lots of gorgeous shots of Nice and Paris. Nice truly looks like an amazing place to visit for sure. :)

Conclusion: While keeping to the high standards of driving, stunt work, and hand-to-hand we've become accustomed to in the Transporter Movies and TV series, the plot could have used a little help. But if you ignore those bits, you're in for a fun and action packed ride.

Posted by Gloria Oliver at 8:35 PM