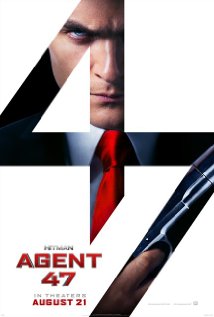 Premise: Katya has been searching for someone most of her life, though all she has to go on are tiny bits of memory and little else. When John Smith shows up in her life, he tells her she is being targeted by Agent 47, an enhanced assassin, who wants nothing more than to silence her and her missing father and the knowledge he possesses. And though that seems true at first, is that what's really going on? (Rated R)

1) Acting - Total Thumbs Up: Rupert Friend does a great job being the stoic Agent 47. Even better was watching him bring out little ticks of 47's personality showing he's more than just a killing machine made of flesh. The awkward moments he has with Katya are hilarious on several levels.

Hannah Ware did a great job as the not so normal Katya. Dealing with particles of memory, avoiding the touch of anyone around her, and coping with overstimulated fear, she knows she's not normal, yet as she spends time with 47 you get the definite feeling she thinks she's found someone worse. lol. Zachary Quinto also did some great work as John Smith. (There's a point about his name that ends up truly having a lot of impact. After it's all done, think about him and his name. Heh heh.)

2) Special Effects - Total Thumbs Up: Lots to like and love with the special effects. Plenty of cool gadgets and setups. The jet engine and the multiple ways it's used were quite nice and visually exciting. The CGI showed through at a couple of places, but not too badly, and was easily overlooked. The subsequent flames and chaos more than make up for it.

A ton of destruction ensues in different locations some very close up, others quite large!


3) Story - Thumbs Up: Way back in the day I played the original "Hitman" game. Hardest thing ever! lol. So hubby and I have had a long time fascination with the character of Agent 47. The red tie, the dark suit, the hairless head, the double .45s, these are all signature marks of the game and the man.

The Hitman game was turned into a film once before, back in 2007. Timothy Olyphant played him then, a man who has one of the best deadpan faces in the business. If you enjoyed that version, you should also like this one, as both were written by Skip Woods.

If you don't know anything about the game, no worries. They fill you in on some quick history at the start of the film. The beginning sequence/mission also tells you all you need to know about 47's mad assassination skills. From the start things are murky, the truth hidden, with much subtly implied and lots of red herrings - so stay vigilant!

As the film went along there were also several lovingly awkward moments, as we're shown little, unexpected bits of 47 as he interacts with Katya over time. The fact she starts picking on him as the film moves along gave a nice subcurrent implying things later made more evident by her father. There were a couple of moments that just made me laugh, they were so cute.

The bathtub scene with the rubber ducky was both cute and disturbing. Heh heh.

A few surprises, though on several of those you'll know something is coming if you pay attention to the signs. There's one, however, that should catch you by total surprise. :)

There's one tiny bit of extra footage right after the credits begin rolling at the end. But nothing after that.

4) Stunts - Total Thumbs Up: A ton of stunts, several which are helped along with some CGI, but many that are not. Lots of gun battles, car chases, and hand-to-hand combat. Some imaginative Fu as well. They chose to do shaky-cam during several bits of the close combat action, but it wasn't overused. Though I do prefer my hand-to-hand not shaken or stirred.

The chase scene in the parking garage was great! What happens after in the street intersection even more so.

5) Locations/Cinematography - Total Thumbs Up: They chose some awesome filming locations for this one. Singapore was absolutely jaw dropping. The commercials had made it seem like the film was in the future, but it isn't. That's actually how Singapore looks right now! (Google for pics, you'll see.) The arboretum alone was fabulous!

Conclusion: Hitman: Agent 47 has everything you'd want from an action film - great stunts, decent story line, bullets, explosions, and a little more. And they left it wide open for a sequel.

Posted by Gloria Oliver at 9:52 PM