Movie Review - The Age of Adaline

The Age of Adaline 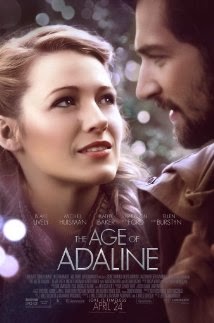 Premise: After an unusual series of events, Adaline Bowman no longer ages. Forced into a life where she must change who she is and where she lives every decade or take a chance at being grabbed and locked away to be experimented upon, Adaline has allowed very few people into her life, with only her daughter actually knowing the truth about her. On the cusp of once again changing locations and identities, she meets a forceful young man named Ellis. Will she give in to her growing feelings for him or run once more  to keep her secret. (Rated PG-13)

1) Acting - Total Thumbs Up: Blake Lively does a marvelous job as the emotionally starved and understandably paranoid Adaline Bowman. Her distress and feelings during the film are very easy to read.

Michiel Huisman as Ellis makes for some great eye candy for the ladies and made it a lot of fun to watch his character's pursuit of the mysterious librarian.

Harrison Ford was a great choice for William Jones - his reactions when he first sees Jenny and during his recollections of Adaline, were wonderful to watch. Ellen Burstyn as Adaline's daughter in 2015 added great little touches by her presence. A similar approach used by Judd Hirsch's character Abe in "Forever".

2) Special Effects - Total Thumbs Up:  Believe it or not, there were several big special effect gags in the film. Cars tumbling down hillsides and the audience seeing the chaos from inside the car. The rather spectacular lightning bolt that gets frozen in time. And wait until you see the asteroid hitting the moon and the cool Earth shots! The ceiling of the movie theater was quite awesome. Really nice work.

3) Plot/Story - Thumbs Up: The tale is told by a narrator played by Hugh Ross. No explanation is ever given of who he is or how he knows the story he's telling - so the audience just has to go with it. While the info he gives is definitely interesting, the fact they felt they had to explain the different phenomena that made two separate events possible felt rather odd.

The methodology for taking the audience back in time and showing them pieces of Adaline's life, however, worked rather well.

On the weird side, they telegraph several pivotal points of the film before they happen. Back around 2002 to 2005, the gimmick of having people in a car having a conversation then having them get slammed by another car was fresh and innovative. But in 2015, the move has become cliched. They've been done so often and it's so easy to tell when they're coming - they don't hold much of a surprise factor anymore. (At least not to me.) This makes the story come across as pretty straightforward with minimal surprises for the audience. The one surprise that would have made everyone lean forward with interest had already been disclosed in the previews, so wasn't a surprise at all.

Still, the tale is told well and we learn enough about her to empathize and care about her and those around her. So it was entertaining.

5) Locations/Cinematography - Total Thumbs Up: The film had many wonderful cinematographic moments. The San Francisco bridge is used to full advantage with lovely day shots, but even more impressive night shots. The time lapse segments were lovely as well.

6) Costuming/Makeup - Total Thumbs Up: Great work by the costuming and makeup departments. Just by looking at Adaline's clothes and hair, you could easily identify the time frame being portrayed. The 1963 segment when she's in the taxi was especially well done by showing us one of the rarer fads of the time. Nicely done! (And Blake Lively looked good in everything! lol)

Conclusion: "The Age of Adaline" is a cute little love story with a supernatural slant for added flavor. No real surprises, but the film still moved along well and entertained.