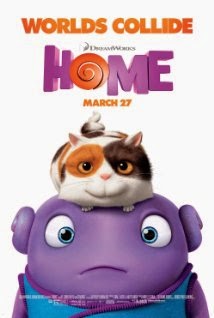 Directed by: Tim Johnson Screenplay by: Tom J Astle and Matt Ember Based on the Book by: Adam Rex Music by: Lorne Balfe

Premise: After the Boov take over Earth, Oh finds his new life there unexpectedly much like his old one. But when he makes the mistake of sending off a party invitation to ALL, which includes the dreaded Gorg his people had run to Earth to escape, Captain Smek and all the Boov want to arrest him. Realizing he made a mistake and trying to hide, Oh inadvertently runs into a human girl. One who accidentally didn't get carted off to Humanity Land like the rest of the Earth's population two weeks before. Now they need to make the effort to understand each other before things get any worse. (Rated  PG)

2) Artwork/Animation - Total Thumbs Up: Dreamworks Animation did an awesome job on the film. The Boov's cool color changes and gradations were neat to watch and gave a different dimension to the alien characters. The circular thematic theme for all things Boov was also very well done. Watching iconic Earth structures floating in bubbles left no doubt things on Earth had changed.

I loved the bizarre clumps of floating things considered useless Earth items by the Boov. The weirdness of the Captain as he found other items to adore and use in non-human ways was highly amusing. There are four quick shorts at the film's site that are basically taped experiments of human devices - definitely amusing.

Pig, Tip's corkscrew tailed cat, was a hoot. His fur swayed and moved even as he purred. The silent but no less entertaining character added a lot of lovely flavor.

The Slush Car, a weird amalgamation of 7-11, Back to the Future, and Herbie the Love Bug, was totally awesome. Talk about using the resources available to the most advantage! The car rocked!

The Gorg ships and their planet destroying Mother Ship were quite impressive.  The Gorg in all their forms were fascinating as well.

3) Plot/Story - Thumbs Up: The commercials and the original "Almost Home" short shown as part of Mr. Peabody & Sherman conveyed a somewhat wrong impression of what the movie would be about, so it takes a little adjustment. The film though does pick up exactly where the short left off.

As the title implies, the main theme of the film is an exploration of what we emotionally call/feel is home and our struggles to fit in in society. Family is also a large theme in the film, as well as friendship and reaching mutual understanding between species.

The plot is pretty straightforward, containing few surprises, but it will definitely stir your emotions at a couple of spots. The reunion scene was quite moving. Some of Boov's reactions were most amusing. Though I have to say that with the things they eat for sustenance, some of the jokes with regards to things best not eaten, fall slightly flat.

Conclusion: HOME is entertaining and cute and will move you, but it won't excite or surprise you. Plenty of fun and action for the kids. The animation is great and has lots of nice inventive touches.


In case you missed it - this played before Mr. Peabody & Sherman - ALMOST HOME

Posted by Gloria Oliver at 9:55 PM