Movie Review - Night at the Museum: Secret of the Tomb

Night at the Museum: Secret of the Tomb 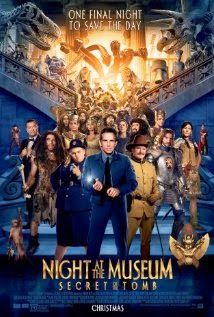 Premise: The magic tablet that gives the denizens of the American Museum of Natural History life is slowly growing tarnished and is affecting those it helps bring to life every night. As Larry tries to discover what's wrong with the tablet and how to fix it, he finds himself with a second, different kind of trouble in his hands - his son has decided he doesn't want to go to college. So the two of them, and a few friends, go to London to consult Ahkmenrah's father on what to do.  (Rated PG)

1) Acting - Total Thumbs Up: All our favorite actors are back for the 3rd installment of the Night at the Museum series - Ben Stiller, Robin Williams, Owen Wilson, Steve Coogan, Patrick Gallagher, and even Crystal the Monkey. For this last roundup we also meet several new characters from the other side of the pond played by Dan Stevens (Sir Lancelot), Rebel Wilson (Tilly), and Robin Williams (Garuda). Yet the most fun  is had with a new character who came about as Dr. McPhee's joke - the new neanderthal in the prehistoric section, Laa, who bears a striking resemblance to Larry.

2) Special Effects - Total Thumbs Up: The animations and CGI on the film were fantastic! Some were grandiose like the event at the new planetarium while others were more subtle, yet totally as impressive, like the flowing rivers and waterfalls in the tapestries of the Asian exhibit hall in London.

Everything in the London museum was fabulous. One exhibit area had flying bronze cranes, glazed ceramic elephants, and other unusual types of art cavorting around. The demon snake with multiple heads looked amazing! The fight with the bad tempered triceratops was a lot of fun to watch as well.

An unexpected and fun bit is when the characters leap into the drawing called 'Relativity' by M.C. Escher. It not only gave the characters a different texture but also let the chase that took them there have all sorts of chaos with shifts in gravity. Too fun!

3) Plot/Story - Neutral: The beginning of the film sets up the main theme of the movie (fathers and sons) as well as introducing a little history about the magical tablet that enables the items at the museum to come to life.

Yet it is once we move onto modern day New York that the main story issue started - Ahkmenrah told Larry something was wrong with the tablet. Larry saw it, saw Ahkmenrah almost fall, saw the corruption move up over an inch in a second (so it now covers an eighth or more of the tablet, but then still decides it's nothing they need to worry about until later. I'm sorry - in four thousand years there's never been something growing/corrupting the metal and you just see a chunk of it turn green and look corroded, and you're going to just ignore it? Uhmmmm. It would have been better to have had things go wrong and THEN discover there's something not right with the tablet.

All the old gags are back, and some new ones appear, keeping the jokes fresh. Several of the better moments, however, had already been spoiled in the previews.

The father/son theme is played on several levels and in several directions. The use of Laa and brotherly jealousy was incredibly amusing. Yet so much time was spent on all the different father/son dichotomies that it left little room for other things - things that might have helped the plot or made decisions and turns seem more convincing.

Magic just is. And the giant secret about the tablet that no one can know is so non-threatening that it made no sense it was ever a secret at all. Also, the way all of Larry's friends just decide things will end, telling him to move on, seemed a contrivance to get out of a bad spot rather than an actual true response. What kind of friends leave another after he just saved you, and especially as you know his son is about to leave the nest?

Yet weirdly enough, the thing that was most disappointing was that after all the fatherly heartache at his son's choices, when the story moves ahead to three years later - there's not a peep about the son. :(

4) Locations/Cinematography - Total Thumbs Up: Some very lovely shots of New York and the outside of the museum's planetarium (which coincidentally matched right up with the book I started reading this week "Raging Heat" by "Richard Castle" - the murder happens at the same place! lol). Some great shots of London as well. Though with regards to the London Museum, there's a disclaimer at the end of the film that not all the exhibits and exhibit rooms match are actually like those shown in the film.

Conclusion: "Night at the Museum: The Secret of the Tomb" wasn't so secret. Some definitely cute gags, great CGI, but the plot was full of contrivances. Still, it's worth watching for the effects and also for the parting of Robin Williams and Mickey Rooney. Kids will love all the jokes and icky moments.