Movie Review - Sin City: A Dame To Kill For

Sin City: A Dame To Kill For 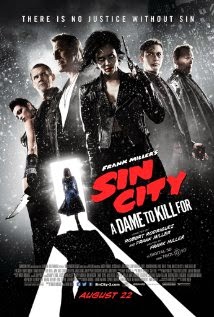 Premise: Sin City means different things to different people, but they all have a story to tell - the dancer trying to shore her courage to get revenge on the man who killed the only one who ever tried to protect her; the young buck trying to make a name for himself and ends up getting in too deep; the old lover drawn back by the femme fatale who broke his heart when she comes asking for his help. And all the stories tied together by the one man who knows the city best, except when his mind forgets - he has a condition. (Rated R)

1) Acting - Total Thumbs Up: Many familiar faces grace the screen -- several reprising roles from the original "Sin City" film, while other make their mark in the city for the first time. Mickey Rourke is still a total hoot as "Marv". Bruce Willis reprises his role as Hartigan, back from the grave. Jessica Alba definitely proves the nine years between films have not slowed her down, and she gives a great performance on multiple levels as Nancy. Josh Brolin is "noir" to his core. Eva Green, though, steals the show, proving once more her tremendous and hypnotic range.

2) Special Effects - Total Thumbs Up: As in the original "Sin City" there's a lot of play with black and white and flashes of vivid colors or flip flopping contrasts -- they all looked great. Some subtle storytelling also went on with the colors, which added some nice flavor to the tales. The women were being their true selves when their hair, eyes, lips, or face had color, otherwise...

The characters with the larger than life faces or bodies were expertly done. The power player Ava talks to during her party looked so realistic I couldn't believe she wanted to be that close to him. And the few shots of Dwight's face after some of his troubles, and of Johnny's hand, had me twitching in sympathy in my seat.

The visuals and sweeps during Nancy's nightmare scene were very nice.

3) Plot/Story - Thumbs Up: It's been nine years between films, but "Sin City: A Dame To Kill For" picks up not far from the end of the original, so those who've not seen the first movie either recently or ever, will have a hard time connecting with the characters. While they do give information on what has gone before it's not enough to deepen the experience. (So be sure to watch/rewatch the first one before seeing this one!)

There's three stories, all of which connect through Marv or the bar. You see a piece of each one in turn, the middle one running on through to its end, then back to the others in reverse order. Because they don't have much to do with each other, and the Dwight storyline was so involving and long, by the time they got to the other two, I'd totally forgotten about them - so it was almost a jolt to realize there was more.

There were also a couple of bits they threw in at the beginning with Marv that were never actually resolved - you knew to whom Marv's jacket and gloves belonged to, but not how he got them. So that made things seem a little disjointed, especially after so specifically drawing the audience's attention to them.

4) Stunts - Total Thumbs Up: Gun battles, car chases, knives, jumping and being thrown through windows, and lots of fists totally fit the films "noir" feel. Add in some crossbows, samurai swords, and tough girls, and there's plenty of stunt fun to be had by all.

5) Locations/Cinematography - Total Thumbs Up: Real or imagined, the locations for the different scenes worked beautifully. Merging reality and CGI as well as playing with shadows and moonlight made for some lovely cinematography.

Conclusion: I'd definitely recommend making sure to see the original "Sin City" before venturing to see "Sin City: A Dame To Kill For" - this should definitely fill in some of the gaps to make the film have more impact and get you as the audience more vested in what's going on. There's lots of lovely visuals and plenty of fist action. The R Rating should be taken seriously for younger viewers - this is not for kids. But the adults should have an entertaining time.