Snowpiercer
(Running super short on time so forgive any typos and crappy grammar!) 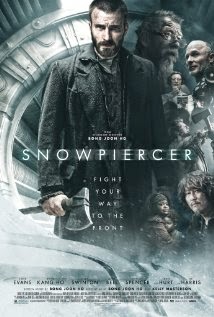 Premise: When a fix for global warming goes terribly wrong, the world is plunged into an eternal winter. While all other life is gone, humans have survived thanks to Wilford Industries and its train. But for those in the rear of the train, life is harsh. Despite previous failed attempts to push their way to the front and confronting Wilford and his mighty engine, when two of their children are taken away without explanation, Curtis gives in and those in the back make their move. (Rated R)

1) Acting - Total Thumbs Up: Loved Chris Evans in this. Shows a different side of his abilities. Jamie Bell was full of passion and hero worship. Kang-ho Song was fun with his interested disinterest. John Hurt and Ed Harris - need I say more? Tilda Swinton was a hoot as Mason. And always love to watch Octavia Spencer work. All these people are what made the movie worth watching. If not for them...

2) Special Effects - Total Thumbs Up: Very subtle and well done special effects. Watching the train careening over the tracks and smashing into ice looked very cool. The engine itself was minimalistically cool. Smoke and mirrors. Several of the cars were fantastic and not just in the sharp contrast with what we'd seen of the train before, but the set up. The sushi car was super awesome.

Lots of neat visuals sprinkled through the film - when they get their first ever look (for some) outside the train; the fight in the car with all the night vision goggle guys; the bizarre school, and more.

3) Plot/Story - Neutral: If you can ignore all the unrealistic pieces of the film, there are some neat plot beneath it. But many will find it hard. Suspension of disbelief has to reach new heights to swallow parts of this one.

The science on this is so terribly, terribly bad. The train is supposed to be a self sustaining entity, and has to have successfully been doing so for almost twenty years. But if the sections of the train we get to see as the revolution heads towards the front is any indication, there's no way it could handle the number of people aboard. They'd been better served to have set this situation up aboard a cruise ship or a facility inside a mountain than on a train. The amount of room they'd need just to reprocess waste materials or grow anywhere near the amount of food or other things they'd need to exist was way beyond what the train could possibly contain. There's not even enough room to walk or exercise, so the fact these people in the back could even move since they've nothing to do but eat and sleep, was a stretch.

Bad science aside, a lot of the social aspects explored in the film were very interesting. They even set up a several mysteries to entice us along - the mysterious Mr. Wilson, the engine, what could they be possibly doing with the back car kids? Seeing how the different sections are all going a little crazy, each in their own way. Neat stuff.

If they'd only paid a little more attention to the science this could have been so so good! They also thought they ended it on a hopeful note, but they are so very wrong.

4) Stunts - Total Thumbs Up: Some really neat stunts and fight scenes. The way they come up with to break from their compartment into the next car or two over was super cool! And the fight with the guards with the night vision goggles as the new year rings in was mind boggling and well done on so many levels. Nice work!

5) Locations/Cinematography - Total Thumbs Up: The look of the cars as they moved from back to front where all little capsules of their own with a different look and feel for every one of them. The spanning shots of the train and the white emptiness, the railroad bridge and the yawning expanse below, lots of neat visuals.

Conclusion: If you can ignore the utterly atrocious science with regards to the train being an actual working self contained eco-system, there is fun to be had. The surprises and reveals toward the end were quite devilish.

Posted by Gloria Oliver at 8:00 AM