Movie Review - Dawn of the Planet of the Apes

Dawn of the Planet of the Apes 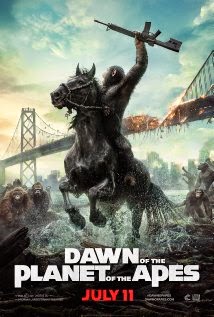 Premise: Ten years after the events depicted in "Rise of the Planet of the Apes", Ceasar and the other simians have created a home for themselves in the forest, while humanity has been under siege by a deadly virus strain. Thinking the humans possibly all gone, two apes have an encounter in the forest as a group of humans travelled the woods from a nearby dam. Despite being allowed to return to the city and told not to ever return, Malcolm goes back into the forest to ask permission from Ceasar to fix the dam. What little fuel the humans in the city have is about gone and they're desperate not to slide back into chaos. But though Ceasar is willing for the two factions to get along, there are others who disagree. (Rated PG-13)

1)  Acting - Total Thumbs Up: Andy Serkis did a phenomenal job as Ceasar. Toby Kebbell was brilliant, his switch from hatefilled ape to comical monkey will totally catch you unawares. Jason Clarke, Keri Russell, Kodi Smit-McPhee and others, really sold the wonder, the fear, and the amazement as they spend time with the apes.

2) Special Effects - Total Thumbs Up: The CGI in this film is phenomenal. You forget the apes aren't real. The amount of detail and expressiveness of their features is amazing. They way the apes move, how they land on tree limbs, even making the limb rock from their weight, how they walk and climb, it all looks natural and real. And wait until you see the baby. Wow.

The combat scenes with the humans are as jaw dropping as they were horrifying. The image of Koba on the horse with the rifles and the fire will stick with me for a long time. Really well done. And wait until you see them take the fight above ground.

Tons of gun play and explosions once things go bad. The bus scene was great. The big tower fight sequence was also very good. And the home the apes made for themselves on the cliff looked very cool and seemed an amalgamation of both ancient Medieval castles and ape habitats.

Totally loved the jungled look of the city as well. The view from Ceasar's home toward the city looked fabulous.

3) Plot/Story - Total Thumbs Up: The quick intro did much to set the mood and flashed enough information for the audience that they could get to the actual story quickly and with a good grasp of what's been going on. That they started us with the apes was a good call, letting the audience get a feel for the developing simian culture and the dynamics in play.

A lot of near misses as the two cultures clash, multiple attempt to reach understanding, and sabotage by those clinging to fear and hatred. Then they build it as high as it can go, only to bring it all crashing down and not in the way you'd expect.

Family - both simian and human - are central themes in the film and get explored from several angles. So are fear and hatred for its own sake. Koba shows all that apes are more human than they ever suspected. Well done!

A lot of homage is sneaked in too, harking back to the original films - the apes riding horses, and later toting firearms, humans (and apes!) in cages and other iconic images. The fact Ceasar's son is called Blue Eyes, the name Zira gave the character George Taylor in the 1968 film. So lots of fan fodder to be found.

5) Locations/Cinematography - Total Thumbs Up: Some very nice work with the cinematography. From the neat shots of the apes swinging in the trees, to the long shots of the streets filled with simians, humans packed together in a cage of their own making and later one made by apes, even the wide shots of both the human and simian homes - yummy food for the eyes. The moving 360 shot during the heat of combat in the city? Priceless.

Conclusion: "Dawn of the Planet of the Apes" not only pays homage to the original films of the 60's but carves out it's own permanent wedge in the franchise. Great effects and solid plot totally entertained.