Movie Review - A Million Ways To Die In The West

A Million Ways To Die In The West 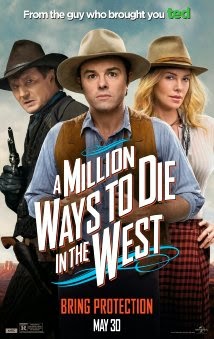 Premise: Detesting violence, Albert is spurned by his sweetheart when he shows up for a midday showdown but instead of shooting and most likely dying, he talks the other guy into letting him pay for the damage caused by his sheep. Spiraling into depression now that he's lost the one bit of light in an otherwise sad existence, Albert thinks about leaving Old Stump for San Francisco until he saves a new lady in town. In exchange, Anna offers to help him win his sweetheart back. But as the two find each other more than they expected, there are secrets Anna is holding that could cost Albert his life. (Rated R)

1) Acting - Total Thumbs Up: Seth McFarlane makes a very convincing spirit trodden man. Charlize Theron was fun as Anna, saucy yet innocent in her own way. Liam Neeson was a wonderful villain as the cheating gunslinger Clinch. Neal Patrick Harris also made for a fun villian, the mustache giving him the look of the old black and white silent western villains.

2) Special Effects - Total Thumbs Up: You'd think a western comedy wouldn't have a lot of special effects, but in this case you'd be wrong. The bar fight alone had a ton of special effect 'gags' - breaking bones, cut and pumping jugulars, yanked off limbs. It definitely wasn't your typical western bar fight. And when you add in a bunch of the other ways there are to die in the west, the special effects people were kept quite busy.

There's also a rather amazing drug trip. Some definite artistry went into that particular segment. (And probably a ton of in-jokes as well.)

3) Plot/Story - Thumbs Up: While the film is full of sex, ethnic, and body jokes, there are also a lot of brainier jokes. Western life is often romanticized in film and books but this movie took it upon itself to dispel many of those illusions with humor veiled doses of the harsh reality. And some of them are quite funny.

The film is 116 minutes long, which is unusual for a comedy, but the extra time gave them space to do more, like add Anna's secondary story line, so a good choice on their part. The F-bombs though, not such a good choice. There were definitely a lot more present than necessary and after while dragged the film down a little.

Most of the usual western movie tropes are used (music, font styles, and more), and they are used well. A few even get turned sideways, giving the audience a few surprises. You'll also never think of mustaches quite in the same way again. (Or Daisies. Even sheep. You'll see.)

4) Stunts - Total Thumbs Up: A western without stunts wouldn't be a western. And since this one tries to show us a millions ways death can happen, there are definitely stunts involved. They're a lot of fun, too.

5) Locations/Cinematography - Total Thumbs Up: Nothing brings to mind the old westerns like seeing a shot of Monument Valley. Cinematographer Michael Barrett totally took this to heart and took total advantage of it. These are some of the most fantastic views of the valley I have ever seen. The movie is worth it just for the gorgeous scenery alone.

6) Music - Total Thumbs Up: Joel McNeely's score helped sell the western feel almost as much as the shots of Monument Valley. Themes and styles from all the big western scores were present. There's a wink for Silvestry in an in-joke scene, and during the big chase scene we get a nice dose of John Williams like score as well. Nicely done!

Conclusion: If you find more than just body jokes funny, and you've seen a lot of westerns, or know anything about the period, there's definitely enough in this film for you to like. The vistas and music alone are totally worth it. Definite adult humor, so not for younger viewers. And there are two small extra bits in the credits.