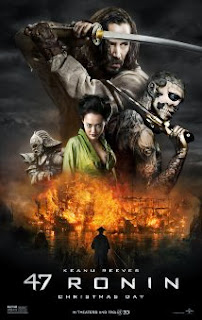 Premise: After being tricked into disgracing himself, Lord Asano of Ako must commit ritual suicide. He pleads with his second in command not to take immediate revenge on the underhanded Lord Kira, as this would doom all in Ako to death. Instead, he asks that they lay down their weapons and became ronin, masterless samurai, and await a better time to exact their revenge and regain Asano's honor. (Rated PG-13)

1) Acting - Total Thumbs Up: There were a lot of familiar and talented faces in this film. Keanu Reeves plays a half-breed believed to have been trained by Tengu (a type of Japanese demon), and who escaped his masters while still a boy. Keanu did a good job appearing subservient and also grateful to Lord Asano despite his outcast status. Hiroyuki Sanada showed great range as Ōishi, Lord Asano's second in command and the one carrying the weight of regaining his dead lord's honor. Rinko Kikuchi was a lot of fun as Kira's witch.

2) Special Effects - Total Thumbs Up: The special effects of the film were awesome. I loved the change sequences of the witch, especially the ones where they integrated the fluid floating cloth into her kimono. The demon the hunting party is pursuing at the beginning of the film also looked great. The pulling of Kira's greed/poison from his body to create a white spider will give you the creeps it looks so good. But the one effect I truly loved was that used for the Tengu Lord. The detail on his avian face and eyes was amazing.

3) Story/Plot - Thumbs Up: The legend of the 47 Ronin, as was mentioned in the film, is a tale considered to show all the best attributes of those following the teachings of 'bushido', the way of the warrior. While this rendition of the tale has added elements not present in thelegend, I was quite surprised and pleased that they kept all the major points the same, especially the end.

In this version of Japan, magic and the supernatural are real. There's also the added characters of Kai, the half-breed/outcast, and Asano's daughter, Mika. However, by the addition of the two characters, even more Japanese culture was imparted in the tale, so it worked out.

There were also some odd changes with regards to "kabuki" and some of the women's dress and styles hair. It's hard to say if these were done in order to point out it was an alternate Japan or something else. For most viewers of the film, however, I doubt it will make much difference.

The one spot that seemed truly odd was how they rendered the Dutch slavers section of the film. Nothing in that sequence was a true portrayal, but it did make for some great fight scenes.

4) Locations/Cinematography - Total Thumbs Up: Filmed in the UK and Budapest, there was a nice diversity of locations both real and imagined. The bitter and cold look of Kira's realm, the serene, green beauty of Ako, and many lovely shots of mountains and moon filled nights, did much to set the mood in each of their scenes.

5) Costuming/Makeup - Thumbs Up: I went back and forth on my opinions in this area. I loved the way the tattooed Dutch slaver came out -- he was a masterful work of art and looked fantastic. Most of the male Japanese costumes were pretty accurate, except for possibly the Shogun's and Kira's. Yet pretty much everything worn by Mika, except when shown as a young girl, did not conform to normal medieval Japanese wear. Even the witch's costume was more accurate than the majority of Mika's ensembles. The hairstyles of the women too tended to extremes and were odd. The reasoning for the variation wasn't made clear.

Conclusion: "47 Ronin" is an enjoyable, 'spiced up' retelling of the famous Japanese legend. Some liberties were taken with costumes and hairstyles, but the spirit of the legend is all there. The attack on Kira's castle was made of perfection.

Shameless PLUG: If you go see and enjoy this film, you might also like to take a look at my novel In the Service of Samurai. The book is set in a fictional Japan were the supernatural exists. And mine has undead samurai and ninja! So go take a look. :)