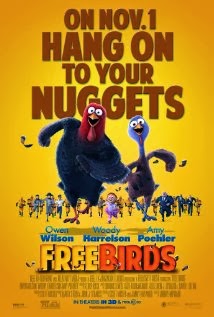 Premise: Reggie had found the perfect life after being chosen by the President's daughter as that years pardoned turkey and got taken to Camp David . That is until a fated evening when he's kidnapped by one of his own, a muscle bound turkey named Jake. And according to Jake, it's Reggie's destiny to come with him and help him use a top secret time machine to go back in time and stop turkey from becoming a holiday meal tradition. The Great Turkey told him so. (Rated PG)

1) Voice Acting - Total Thumbs Up: Woody Harrelson and Owen Wilson are a lot of fun as Jake and Reggie. But 'hands down', it is George Takei who steals the spotlight as S.T.E.V.E. He was a total riot! Amy Poehler was cute as the chief's daughter Jenny. Kaitlyn Maher as the President's hyperactive daughter was utterly adorable.

2) Artwork/Animation - Total Thumbs Up: Reel FX Creative Studios did a great job with the animation. They brought in a lot of little touches to the film that made some of the visuals unique. I especially enjoyed the inventiveness with how the tukey use their wings. The time machine take off and travel scenes were quite spectacular and also very funny.

I thought it a neat touch, too, that the turkey from the past showed a lot of the same visual qualities as their indian neighbors. The animated jokes for Jake and Jenny's brother testing each other's manliness were both hilarious and disturbing.

3) Plot/Story - Total Thumbs Up: Reel FX did the 'most fun thing ever' just as the film began. First they freely admit to taking some liberties with the historical facts in the making of the film. Then they reassure us that talking turkey, however, are real! This seemingly small bit does wonders in setting the whole tone for the audience right from the start. And the fun only grows from there.

Several themes are explored and are interwoven through the film and characters - belonging, perceived happiness, loyalty, faith, guilt, acceptance. They do touch a few times on rather sobering items, but they don't linger on them and they actually add depth to the tale being told.

Kudos for how they decided to do the character of Jenny. Her lazy eye problem, while originally something which would be off putting, becomes a rather endearing trait by the end of the film. It also shows that one need not be perfect on the outside to be loved or appreciated by those around them.

No unexpected or innovative plot surprises, but plenty of time travel foolery - which made for a lot of fun. S.T.E.V.E. was the best idea ever. Though I have to say he seemed to quickly evolve into more than was originally intended. He even appeared to have a universal translator - a nice SF in-joke.) Plenty of SF and regular jokes, visual and not, for the parents and the kids.

Conclusion: "Free Birds" was quite enjoyable, especially with all the usual hijinks one can expect from a time travel movie. George Takei was a blast. Make sure to sit through at least part of the credits as there is an extra scene.