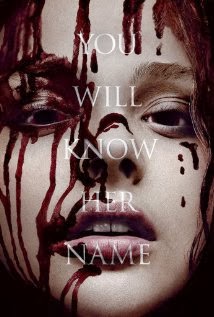 Directed by: Kimberly Pierce Screenplay by: Lawrence D Cohen and Alberto Aguirre-Sacasa Based on the Novel by: Stephen King Cinematography by: Steve Yedlin Original Music by: Marco Beltrami

Premise: Carrie White led a very sheltered and strict life until she went to high school. An easy target, things escalate when she has her first period and she's made fun of for not knowing what it is. Her mother's emotional problems don't help the situation. But when Sue, one of tormentors that day, decides what they did to Carrie was wrong and she tries to make amends, her jilted friend Chris decides to make Carrie's magical prom night an utter nightmare. But she's not aware something has awakened inside Carrie. (Rated R)

1) Acting - Total Thumb Up: Julianne Moore and Chlöe Grace Moretz were fantastic as the emotionally scarred mother and daughter. Moore's love and focused self hate came through clearly as each piece of her frayed memories and delusions are revealed through the film. Moretz easily conveyed her character's clashing desire to be liked but not hurt. Watching her at the prom and seeing what Carrie could be, even as we know all will go terribly wrong, just made the moment that much more poignant. Portia Doubleday as Chris was totally convincing in her self interest and inability to admit things can't always go her way.

Kudos to Barry Shakaba Henley for his role as the school principal. His expressions and utter reticence on discussing girl issues were delightful.

2) Special Effects - Thumbs Up: Most of the effects used for "Carrie" were fantastic. The telekinetic feats as Carrie comes into her power were done seamlessly and looked great. The destruction of the house, the explosions, the events at the prom, all wonderful special effects moments. Yet it was in the one thing you'd not expect there to be a problems that the film seemed to slip a bit - the pig's blood once it got all over the girl. From scene to scene the look of it on Carrie was inconsistent. And sadly, this inconsistency at the expected climax of the film drained a lot of its built up energy.

3) Plot/Story - Thumbs Up: The plot for "Carrie" is much like the proverbial 'train wreck'. You know it's coming and you're just waiting off to the side to see how they make it happen. Lots of nice build up and views of the different pieces aligning in such a way that the film culminates in the grand chaos of an unknown power given full, free reign.

It's been years and years since I read the novel by Stephen King or seen the original film version, so it's hard to make a good comparison between the three. This version definitely had all the iconic scenes of the original. However, the advertising inferred that the chaos in this one would extend much farther than just the high school - that the entire town would be showered with Carrie's wrath - this is not the case. So like the issue with the blood, this too took away some of the expected enjoyment during the height of the film.

4) Cinematography - Total Thumbs Up: There was a lot of really nice work with regards to the cinematography. Our first shot is of this well maintained, nice looking, wooden house. Then with a slow forward motion we're taken inside to find that within all is not as peaceful and idyllic as the outside implied. There were also some great shots of the location where the prom is held as the students work on setting it up. The magical transformation of the room once it is complete is much like the transformation Carrie herself goes through. And like her, it too becomes scarred as the evening reaches it's climax. Nice bit of duality there.

Conclusion: "Carrie," for the most part, does well as a remake. Unfortunately, the few spots were it failed were part of the 'payoff', so it hurt the film overall. Still, it as definitely entertaining.