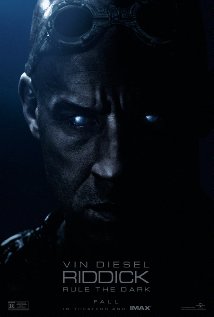 Premise: Betrayed by the people he ruled, Riddick finds himself stranded on a merciless world filled with predators. Surviving despite the odds, he finally spots a foe he won't be able to beat. Running across an old mercenary outpost, he triggers the emergency beacon for a rescue. The downside is that he's still a wanted man in this side of the galaxy, so getting the mercs who'll be coming after him to cooperate, won't be easy. Especially when the bounty on his head will be doubled if he's brought in dead. (Rated R)

1) Acting - Total Thumbs Up: Vin Diesel plays Riddick once again. This Riddick goes back to the basics. Vin Diesel used the cool shiny eyes to great effect in this film, adding a subliminal extra layer to his acting because of them. His deadpan delivery worked extremely well in several surprisingly cute, comedic moments. Jordi Mollà gave Santana a sense of complexity, showing competence and bravery going hand-in-hand with leers and immorality. Matt Nable was fun to watch as he moved through the beginning of the film as cool, ordered, and in control to finally revealing why he'd come to the far off world - and how the telling of it, showed the true conflict hidden inside. Katee Sackhoff pulled off being super tough and also feminine with great aplomb. I do have to wonder if her name Dahl, which they all pronounced as 'Doll' was some kind of joke in and of itself.

2) Special Effects - Total Thumbs Up: I loved the creatures the special effects department came up with for the isolated world. The 'dogs' were fascinating - a cross between a hyena and a great dane. Even more fascinating were the guardian beasts, with their long tails with blades and air holes to mimic a face and keep the prey distracted. Nasty little things.

Inventive and varied weapons added variety to the normal assortment of handguns and knives. It was interesting comparing 'the rich' mercenary toys and the more 'average Joe' equipment. Even the ships owned by each group were of similar makes, yet markedly different at the same time. The weird motorcycles with horse saddles, and which seemed to move a lot like horses, were very interesting. The CGI didn't mesh as well with the bikes as with some of the other effects, but were still very cool.

The planet itself was fascinating. It had obviously gone through some great calamity long ago, the remnants of a bygone era still visible here and there.


3) Plot/Story - Thumbs Up: I haven't seen the two previous Riddick films (and the animated shorts) in some time, so I was fuzzy on specifics of the backstory, but it's not really necessary to have seen the previous films to enjoy this one. For people with no knowledge about the character, this might actually work in their favor as they will feel more of the pressure Johns is under as he tries to make out the truth about Riddick. But for those who do know the story and the other films, it would probably be worth while to rewatch both "Pitch Black" and "The Chronicles of Riddick" before seeing "Riddick" as both are touched on in this new section of the character's evolving tale.

A lot of things are hidden in the background and are never actually spoken of, so keeping an eye out and actually studying the cave paintings, will tell you much. I did miss a few, but those I did notice gave me the sense the guardian creatures were made and somehow later got away from their maker's control. Also, if you look at the eyes of the 'dog', they're both different, but one actually looks human. So there's a chance the 'dogs' were actually the sentient dominant race at some point. They're definitely smart, even in their current state.

Something else possibly implied, but never shown, is that the planet has a population of large herbivores. Riddick at one point has a giant leg he's using for emergency rations. By making the assumption it came from something large, it is then understood how the world could support the large number of 'dogs' and guardians that we see. I wish they'd shown one at some point so those watching could be sure. It would have easy to do, just show one or two giant herbivores walking off on one of those spanning sweeps across the surface. The simple glimpse would have explained how the planet could support the current lifeforms. Sadly, though, they didn't.

Two major weak points in the overall plot - 1) To avoid what was coming, why didn't Riddick just continue on his journey? If he'd avoided the path of the storm, he would have been safe. 2) While most of the character motivation made perfect sense, Diaz's at the last part of the movie did not. Turning against Riddick would have been understandable, but not with what he actually did.

I did totally love the mind twisting scene of "Fair Trade'. It was a beautiful ploy. Well played. The film had several instances of this type of mental combat. Loved them.

4) Stunts - Total Thumbs Up: Though Vin Diesel ends up fighting a lot of CGI, all the battles looked smooth and were well choreographed. The fight with Johns, Riddick, and the guardians was a great scene.

5) Locations/Cinematography - Total Thumbs Up: The views of different parts of the world the story takes place at were mesmerizing. The location looks and feels very different from what we know, which added a lot of flavor to the film. These were even enhanced as we got to see several of these as how Riddick actually saw them with his special eyes. Even after he finds a kinder area on the planet, it still looked harsh. There was no denying he was the sole humanoid on that planet.

Conclusion: If you can see past the few flaws, "Riddick" is quite entertaining. Cool toys and cool gear, as well as some surprisingly funny or suspenseful moments, will make the experience worthwhile.

Below is a treat I found while looking for info on the movie. The voice over is pretty much what you get at the beginning of the movie, but this has more a bit more story to it. Enjoy!