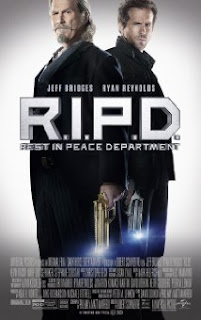 Premise: Having succumbed to temptation, Detective Nick Cruz and his partner took some gold they found during a police raid. Later regretting the impulse, Nick seals his fate when he informs his partner he's decided to turn his share in to the evidence department. Soon dead, Nick's soul is sucked towards the sky, but then gets diverted sideways into the R.I.P.D. - the Rest In Peace Department. They want him to help bring back the souls of the dead which have fallen through the cracks and remained on Earth rather than move on to Judgement. These dead's corrupted souls will affect the living world, turning it toxic, so they must be brought back or eradicated. So Nick has his hands full and in the midst of it reconcile himself with the fact he's dead. (Rated PG-13)

1) Acting - Thumbs Up: Jeff Bridges in his role as Roy will make you laugh, cringe, and want to smack him all at once. These emotions are clearly and nicely reflected by Ryan Reynolds as Nick. Kevin Bacon was fun as Hayes - sweet, friendly, and evil. James Hong and Marisa Miller looked to have had a lot of fun playing Nick and Roy's earthly avatars.

2) Special Effects - Total Thumbs Up: The first minute or so after Nick's death were awesome. I loved treatment of that whole scene. Then there's the sequence as he leaves the ground and is pulled heavenward only to be shunted sideways into jarring normalcy  - also nicely done. Some of the CGI movements of people were a little too flexible to pass as real people, but could be considered a 'nitpick'. Though this same flexibility served them well later with the 'deaders'.

The holes in reality and the collapsing parking garages came out great. The bank vault and the casefiles area were truly superb. Even better is the scene at Hayes' house when a truth is revealed.

3) Plot/Story - Neutral: For readers of the Dark Horse comics, the details of how Nick died and how he came to be employed by the Rest In Peace Department are not the same. In the film Nick is well aware of who killed him, while in the comics he possessed no idea on who had done the deed. A point which proved a major factor on why he signed up for the department.

While the set up and plot were believable and worked overall, there were several spots that didn't quite work or where explanations were bypassed. Roy calls attention to the fact that one of the 'deaders' is exhibiting powers he's never seen before but nothing is ever done to reveal any information on why he could do it. A reference is made to special talismans late in the film, but nothing ever ties them back to the particular character. There were also no explanations for the intensity of decaying power of a recently deceased person - so this was yet another items left unresolved.

It didn't help that when things were at their lowest point, and Nick has finally had his fill of Roy, he stuck around with him. Sadder still was the lack of follow up once the main ordeal was over. Did the Eternal Affairs department set everything back as it had been or was the footage of all the 'deaders' now forever in the internet? We never find out one way or another.

I will say there was one piece of genius in the film - setting up a rough and tough man of the west with a beautiful woman avatar. Someone obviously was hoping to teach him a lesson.

4) Stunts - Total Thumbs Up: CGI or real, the stunts worked well. The setup when Nick realizes time seems to have stopped was great - kudos for the number of explosions and flying debris frozen in time and space.

5) Locations/Cinematography - Total Thumbs Up: Some interesting angles and sweeping looks at the city of Boston. Really neat shots in the Rest In Peace Department areas too.

6) Music - Total Thumbs Up: The film had some nice background music tracks by Christophe Beck. There is also a song Jeff Bridges helped write and perform that will have your eyes rolling. They play a more professional sounding version during the credits.

Conclusion: Though "R.I.P.D." feels a lot like a "Dead Like Me" meets "Ghost Busters" and "Men in Black" mix, the problems with skipped explanations and lack of real follow up at the end, kept it from being an awesome combo. Still, it was definitely entertaining. You'll never think of coyotes in the same way ever again.