(Sorry this is late! Started later in the evening than usual and was longer than usual too! Eek! This posts take me about 2 hours of work and I was so sleepy.) :P
Pacific Rim 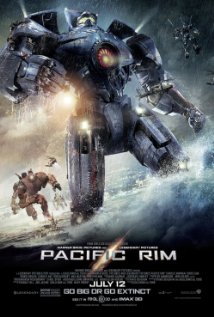 Premise: A rift in the ocean floor has allowed gargantuan creatures access to Earth. Once humanity united to fight the threat by creating giant robots, they held the creatures at bay for seven years. But the creatures have been studying mankind's protectors and how to defeat them, so after five more years, the creatures now have the advantage. Earth has one more trick up its sleeve to try to put a stop to them for good. (Rated PG-13)

1) Acting - Total Thumb Up: While you don't normally expect a lot of acting prowess in this type of film, everyone involved did a great job. Charlie Hunnam showed great duality with his portrayal of Raleigh Becket - showing both his reticence to rejoin the Jaeger program, and his conflicting eagerness to get back in the fight. Kikuchi Idris as Mako also showed several facets of her character and what drove her as Mako Mori. Idris Elba carried the mantle as Earth's protector, doing whatever it took to ensure humanity would survive. Charlie Day and Burn Gorman were great as the disagreeing scientists.

2) Special Effects - Total Thumbs Up: The crew did marvellous work with the special effects. The robots (Jaegers) looked awesome and had the great clunky feel and movements you expect from giant robots. The beasts (Kaiju ) were also a lot fun. The farther into the film we went the more details about them we got to see.

The cockpit, suits, and especially the holographic instrumentation were fabulous. The robots' super cool energy weapons, the monsters' breath weapons, the general destruction, are all anyone could hope for. I also loved the housing hangars for the Jaegers. It looked and felt like a place where you would keep and maintain giant robots.

For those of you who've been long term fans of Japanese Kaiju films and their monsters, like Godzilla, Mothra, Gamera, as well as those who enjoy anime, you'll see lots of bits of homage to both the monster film genre and the big robots anime. (The inevitable mecha wielding a sword being but one of them.)

3) Plot/Story - Thumbs Up:  The film had a surprising number of emotional threads for us to follow. Despite that, it would still be best not to look at matters too closely - especially the science. Just 'go with the flow' and take the explanations at face value to get the most enjoyment possible out of the film. There's enough there to at least make it plausible.

The world is robust, but we see it very quickly and very briefly as the filmmakers had more material than they could include in the 132 minutes of film. "Pacific Rim" would have made a great mini series! Especially with all the changes occurring to society and the world due to the continuing invasions. It would have been incredibly fascinating to get the scoop on the real reasons funding was cut to the Jaeger program and what drove the governments' to try the Wall project. But as it stood, without more behind it, these details actually only bogged down the story

Sadly, they decided to gimmick a way for some of the characters to live when they couldn't have possibly survived. And they put something I can't name, in a place that made it entirely too convenient. You'll know it when you see it.

4) Stunts - Total Thumbs Up: While the fights between the robots and the monsters were mostly CGI, the consequences of the battles on those driving the robots were not. So the stunt department was quite busy doing a great job of rocking and falling inside the head compartments, trying to survive during breaches, and more . And of course the stunts with all the groups of people running for their lives!

The recruit hand to hand combat scenes as they try to find a good fit for Becket were masterful.

5) Locations/Cinematography - Total Thumbs Up: Though they don't make it obvious, the makers of the film were rather sneaky. At first the audience would only be shown quick glimpses of the creatures - an eye here, a claw there. Even during the first big fight, our view of the monster was limited. But the longer the film went, the more we got to see, until finally we actually see them in their full might. Nice way to play up the audience's anticipation!

Great cinematography showing the audience the devastation at San Francisco and later during the giant battles.

6) Music - Total Thumbs Up: The original music by Ramin Djawadi fit the film perfectly. Just enough military swagger in the tracks to get the audiences' blood pumping for each upcoming battle. Well done!

Conclusion: If you're looking for some sock'em rock'em robot monster action, this film is for you! Great battle sequences, great special effects, and humanity to rally behind. Just don't look to closely at what makes it all happen or the bit of cheating at the end, and all will be well.