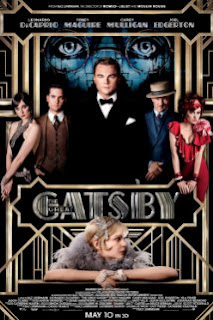 Premise: Nick Carraway has big plans for his future. He moves to New York after college to study and enter the world of stocks and bonds. Renting an old gardeners cottage nestled between the homes of the 20's new rich, he gets drawn into the secrets and games played by those new and old to power and money. (Rated PG-13)

1) Acting - Total Thumbs Up: Everyone's talents shine as brightly as all the amazing decorations at Gatsby's parties. Maguire is a delight as the naive, later turned bitter, Nick Carraway. DeCaprio pulled off being rich and sophisticated easily, but what will win audiences over is his little boy eagerness and embarrassment before and during the contrived tea party. Too funny!

2) Special Effects - Total Thumbs Up: While one might not expect this to be the type of film to special effects, it actually had a lot. The bay, the green warning light, the three different sections of New York were all created or much enhanced through CGI work. There's also a fireworks sequence to Gershwin that was fabulous.

The film starts in black and white and an old Warner Brother's logo, mimicking the reel films of old. Then it blooms to color during the beginning music, and fades away in the same manner at the end of the credits. A nice bit of homage to Warner Brothers and all the previous novel to film incarnations of "The Great Gatsby" over the years.

3)  Plot/Story - Total Thumbs Up: I read "The Great Gatsby" back in highschool, so it's been quite a while, therefore I can't make any comparisons in that respect. I might have also watched the 1974 version with Robert Redford, but again, don't remember enough to compare with the new version.

The way the film unfolds, the audience is drawn along with Nick by the experiences and people he meets in during that strange summer. As things unfold, tidbits get sprinkled here and there and we follow the trail as the slowly unfolding mystery of Gatsby is revealed.

Though not obvious, a lot of themes and symbolism are sprinkled throughout the film giving the audience subconscious clues of the secrets and darkness lying below the surface. Though the first time you hear about "God's Eyes" you might dismiss it, by the end of the film you'll be thinking of them the same way.

4) Stunts - Total Thumbs Up: There aren't many 'gags', but the ones they have are very well done. The speeding trips to town were especially fascinating, the cars and riders and those they avoided colliding with, shown from different angles and directions.

5) Locations/Cinematography - Total Thumbs Up: The tiny cottage next to the giant Gatsby castle, the old blue blood mansion across the waterway - each place was unique and almost seemed to have a life of its own. With the CGI augmented visuals, some truly quirky but effective filming tricks get pulled along the way, giving the film a very unique feel.

Gatsby's grounds and the rooms indoors are opulent and almost fairytale like. The 'fantasies' in Gatsby's mind brought to reality, yet still retaining a feeling of it being 'not quite real' at the same time. Great ambiance throughout.

6) Costuming/Makeup - Total Thumbs Up: Between all the parties at Gatsby's, the more laid back affairs at the Buchanan mansion, and the middle of the road places, each had their own look and feel. The dresses and makeup for the people at Gatsby's weekend parties were amazing, though also easily missed when trying to absorb in the 'over the top' grandeur. Myrtle's dress spoke volumes in her introduction, clueing the audience as to who she was before she ever spoke a word.

Conclusion: "The Great Gatsby" is a grand spectacle of sight and sound. A lot of symbolism and minor themes are woven around a good and solid plot. A poignant peek into the life and attitudes of the 20's.