Steam is the devil! I decided to play a little Worms Pinball and then when I was leaving they showed me weekend specials. Nooooooo! They had one that was so bizarre and cute looking (and cheap!) that I caved in. Thus this weeks virtual tour is on the indie game Little Inferno.

Little Inferno - a game for your inner pyro.


The premise is that you're a kid, alone in your home, and just got Little Inferno for a present. The world is cold and getting colder. So you can do your part by burning stuff up. You also get money for burning stuff, which allows you to buy more stuff to burn from catalogs. 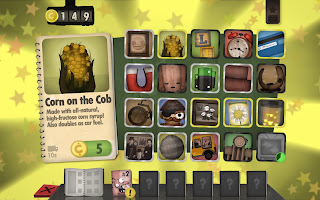 This is the first catalog. Make sure to keep each description up for a half minute. Many have super amusing little videos. A few are disturbing. Heh heh 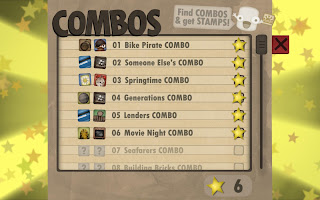 As you buy stuff and burn it, you also realize you can make combos! This give you a big cheer, a big star, and reward money and stamps. (Not that you can really run out of cash. There are spiders that come down the chimney you can flame and get coins.) 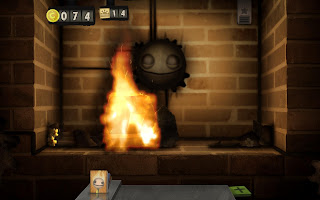 This is what Little Inferno looks like. The face in the middle doesn't do anything (until way later) though the moon and magnet can make the gears move faster. On the top right is the toggle to show you the combo list. On the top left is your cash and stamps. (Stamps can make your delivery of items faster.) At the bottom is the button to open up catalogs and your mail/package shelf. 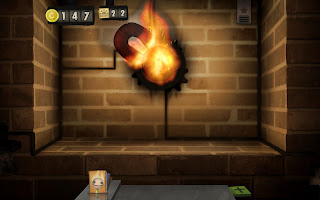 The things you put in there can react in all manner of unexpected ways. That's the Mini Moon and Magnet - both on fire. And defying gravity. 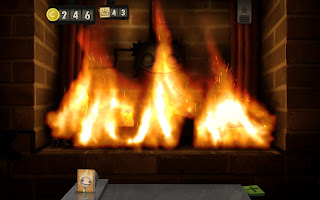 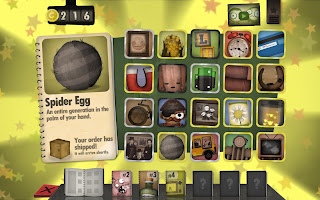 You have to work at some of the combos too. Hints might be found in the descriptions, others you have to think outside the box for. Spider Egg works for the Generations Combo. Of course some combos you can't create until you get more catalogs. 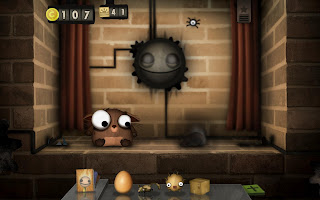 Spider there in the back. There are some that even fly. Some of the stuff do things when placed in the fireplace before you even torch them - move or make sounds or have an effect on other things. This little kitty looks around. When you flame him up, he poohs all over the fireplace! Ewwww. (That dang LOL Kitty Combo still evades me!) The puffer fish made me jump when I put him in there. Not gonna tell you why! Hee! 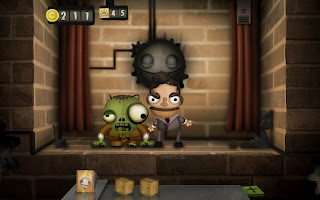 Unopened packages on the shelf there. (The green plus is to pay to make the shelf bigger, so it holds more stuff.) 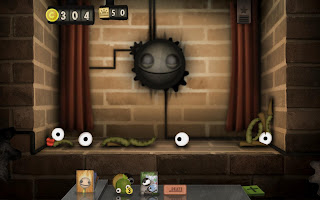 Blow Fish and Octopus thing after they did their thing. They eyes stayed around for a while. Rolling around, watching. Always watching. 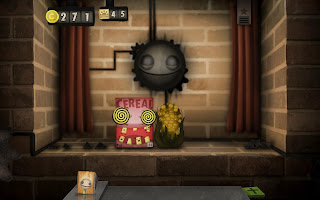 You get letters as you play from the creator of Little Inferno, from a neighbor, and from the Weather Man. Make sure you're done making combos before you do the combo the neighbor tells you or you won't get to do more! Though you then do go into a whole other fifteen minute section of the game.

WARNING! The little 1960's like happy ditty that plays when you are looking at the catalogs is highly ADDICTING! That song has been driving me nuts for a week! And all you'll want to do is get to play and make combos! Combos! COMBOS! (And torch stuff! Woot!)
Posted by Gloria Oliver at 9:03 AM