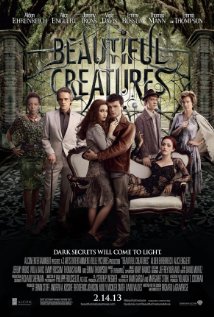 Premise: Ethan is tired of living in the nowhere town of Gatlin. But when he returns to school for his junior year, he meets a new student, Lena Duchannes, and she reminds him of the girl who has been haunting his dreams for weeks. So despite the fact, or because of it, that she's part of the shunned Ravenwood Family, he finds her the most fascinating thing he's seen in years. But unbeknownst to him, hanging out with the Ravenwoods could prove deadly. (Rated PG-13)

1) Acting - Total Thumbs Up: As Ethan, Alden Ehrenreich gives us a quirky, complicated teenager that is too fun to watch. Alice Englert had good chemistry with Alden, which made for a cute and believable romance. Emma Thompson was a big surprise, and I loved what she did with her role.

2) Special Effects - Total Thumbs Up: Though effects were somewhat scarce at the beginning of the film, we got to see more and more of them as the story progresses . Many of the effects were subtle, while others were obvious, but all were excellently done. The battle of wills in the dinning room was amazing. The storms during the climax were breathtaking. The scene with the falling snow was gorgeous. Lots of great work by the special effects team.

3) Plot/Story - Thumbs Up: The movie takes place in the south, so the fact the story takes its time to be told, should be expected. I haven't read the book series "Beautiful Creatures" is based on, so I can't say how faithful the film makers remained to the book, but it has definitely made me curious about them.

A lot of great one-liners and teasing quips were sprinkled throughout the script. One funny moment had no words at all, yet made me laugh out loud. The sense of discovery and the teasing of the audience about further mysteries and secrets was nurtured well. There were also a few surprises in the plot, which kept things quite interesting.

Yet while having the film told from the point of view of Ethan gave it the flavor of something different, events which happen later switch the focus, which unfortunately drained away some of the film's momentum. The audience was vested with Ethan, so the story lost a lot when he wasn't around.

4) Locations/Cinematography - Total Thumbs Up: The film used great locations to create the ambiance of a small town in South Carolina. The Ravenwood estate with its seemingly dilapidated home and walls gave the sense of an old southern plantation. This gave it that much more impact once Ethan sees the interio.

The long shots of the lonely road leading to and from the estate only helped fuel the fun later when Ethan finds himself going in circles. Some of the areas were touched up, but these only added to the fantasy look and feel of the film.

Conclusion: "Beautiful Creatures" is a sleepy tale full of colorful characters. Mysteries and secrets abound and proved to be quite entertaining. You won't run around town shouting its praises, but it definitely did entertain.