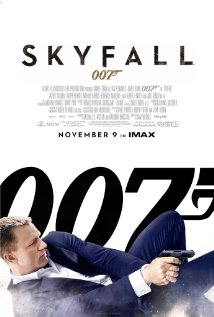 Premise: A hard drive has been stolen from MI6, one which contains a file with the names of all agents currently infiltrating terrorist organizations. Failing to retrieve it, M finds herself in trouble at home, but worse, she comes to realize she's being targeted specifically. The file must be retrieved and the instigator stopped before hundreds of lives are compromised by the contents held within it. (Rated PG-13)

1) Acting - Total Thumbs Up: I love to watch Daniel Craig and Judi Dench work together - a dysfunctional spy family - what fun! Javier Bardem was the perfect choice for Silva. The story he tells in his introduction, combined with his easy manner and smile, will give you chills. Mr. Bardem's take on Silva was fascinating and refreshing. Bérénice Marlohe set up the stage beautifully with unvoiced hints about her employer. The scene with her at the bar and the minor cues she gave during the conversation were excellently done.

2) Special Effects - Total Thumbs Up: The two best special effects had to do with a subway train and a face. The subway train effect was a huge undertaking and will make your heart pound. Yet though the face effect was smaller, it was insidiously subtle and in many ways packed as big a punch.

Gun shots, explosions, shrapnel, computers, the special effects department had much to do. They worked very hard, and it shows.

3) Plot/Story - Total Thumbs Up: The general plot is pretty straight forward, and one we've seen in spy films before. Yet all the underlying plots and themes truly make the finished product have more depth and complexity than is immediately apparent.

Keeping in mind that this is the 50th Anniversary of "Bond" films, there is a fabulous subtext throughout of old vs. new, young vs. aged, cheap toys vs. expensive ones. But even as these items are thrown out there, rather than have one side or the other win, we get a connecting circle - one that extends not only to those in the film, but over the 50 years of "Bond" films themselves. True "Bond" aficionados will notice scenes, places, people, and objects from previous Bond films connecting once more in the present. Some definite love went into this film.

Pay close attention to the "Skyfall" song section - a lot of info hidden there with regards to Jame's past and future. It was very nicely done. They even seemed to mix styles to mirror past opening sequences.

Also watch for the theme of family and how they used in the movie. I totally appreciated the realism of Jame's injury and his having to cope with it. Well done.

4) Stunts - Total Thumbs Up: Unlike the last "Bond" film, the shaky cam was kept to a minimum and the audience could actually see and enjoy the expensive stunts, gun battles, and explosions to the fullest. The chase scene in the first sequence of the film, especially the section with the motorcycles, was great.

5) Locations/Cinematography - Total Thumbs Up: As we've come to expect from "Bond" films, there were many exotic locales to enjoy, such as Shanghai, Scotland, Turkey, and England. And the cinematographer took great advantage of these locations for our benefit. The high rise in Shanghai was a wonderful choice, especially with the addition of the flowing neon. It made for a fun section of 'cat and mouse' and optical illusions.

The Chinese gambling den and the waterway to reach it were very reminiscent of early "Bond" scenes, as was James' tuxedo. The deserted island is like none you've seen before, and quite creepy in its way.

Conclusion: An awesome example on why "Bond" films are so loved by moviegoers! A wonderful mixing of old and new as well as a great tribute for the 50th Anniversary. The franchise is alive and well!

Rating: 4 out of 5 (Hubby's Rating: Worth Paying Full Price To See Again)
Posted by Gloria Oliver at 11:46 PM