Hah! After a lot of trouble, I was able to figure out a way to get pics for the new game hubby made me get called Dishonored. (Wished I'd figured it out sooner. Could have taken pics of the floating whale! Heh heh.)

It's a first person sneaker with magic. Makes you think hard about moving around in more than just the ground. You pretty much have to look at everywhere you go in a 3D frame of mind as going up and around is better for keeping your hide intact!

Tagline for the Game is: Revenge Solves Everything 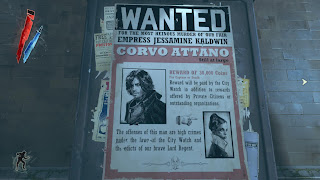 This is who you are - Corvo Attano - Assassin and protector of the Empress. Except when you come back from a long mission to look for a cure to the plague destroying the empire, you get used as the scapegoat for those who kill her. (I got the strong feeling Corvo was more than just her bodyguard too!) After 6 months of torture, they're finally going to put him out of his misery when those who know something isn't right intervene.) 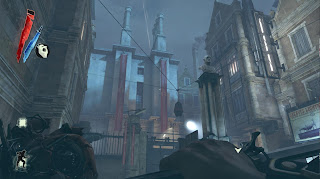 This is the first official mission after my escape and meeting those who freed me. (And having a weird nightmarish audience in my dreams with the Outsider, who's granted me powers.) Have to find Overseer Campbell. The red slash is health, the blue slash is mana. The weird heart icon and beating mechanical heart currently gripped in my right hand are a power to find bone shards and bone runes for added powers. (The heart can also tell you things about different locations. Since the voice is a woman's I have a very strong feeling the Empress is traveling with me. Eek!) 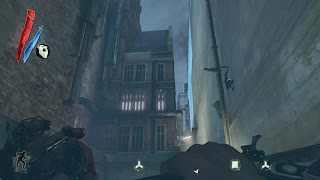 Alleys and buildings in the better part of town. (Had already gone through the poorer area by the time I figured out how to get pics.) 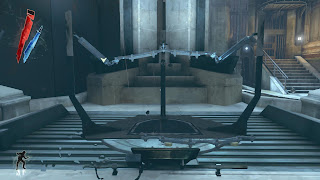 Holding device on the street. Think the old Puritan stocks but of metal. Should have taken a pic with the guy in it before I set him free. Doh! 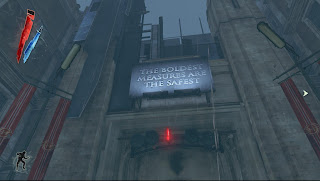 There are signs and graffiti everywhere with their own lovely sayings. :P 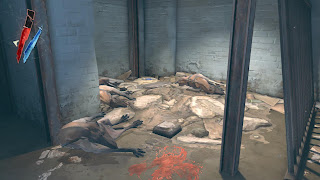 Pile of dead guard dogs. (Treasure had been hidden in the corner.) Hubby had complained of the dogs (He played this first) and now I know the pain they are too. lol. (Though the piranha groups of rats are way nastier. They can tear a body apart and make it disappear in a minute flat! Eek~!) 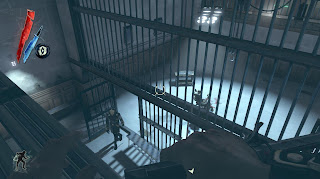 The best place to be, up high. Interrogation room is on the left. Corvo is intimately familiar with it. Later in this mission, I brought Overseer Campbell (one of the men who framed me and killed the Empress) back to brand him as a heretic. Heh heh heh. 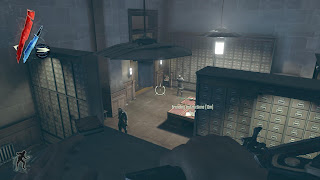 Lower part of the library. I'm traveling by bookshelf and big lamps. :P 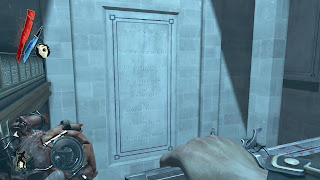 Click on this one and you'll see the 7 rules for Overseers. I swear the more I see of this world the creepier it gets. The Empress had no idea (I hope) of half the nasty stuff going on around this place. 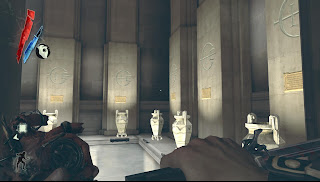 Urns for what I assume were famous overseers.


They encourage you not to kill, but they also make it very hard not to. Still trying to figure out the choke hold and how best to approach targets to use it without being caught. It's hard!
Posted by Gloria Oliver at 9:22 AM