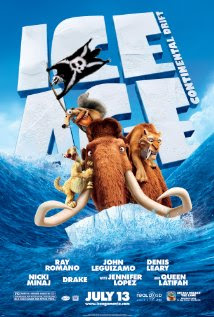 Premise: After some family strife, Manny, Sid, and Diego find themselves separated from their loved ones and friends as their home splits and drops them with a chuck of ice into the ocean only to be dragged away by the current. As they struggle to survive and find a way back home, Manny's wife Ellie, and his daughter, Peaches, deal with trying to stay alive long enough for them all to come back. (Rated PG)

1) Voice Acting - Total Thumbs Up: Denis Leary, John Leguizamo, and Ray Romano as Diego, Sid, and Manny are as fun together as in the other "Ice Age" films. Many old favorite characters are back, but there are also a bunch of new voices and characters. My favorite by far had to be Granny, played by Wanda Sykes. Granny was a total hoot! Also totally loved Peter Dinklage as Captain Gut - that was one mean ape.

Lots of unexpected voices doing acting bits like Alan Tudyk, Patrick Stewart and more. A lot of great talent was to be found in this film.

2) Artwork/Animation - Total Thumbs Up: Blue Sky Studios shows the same great work they've shown in previous films. The attention to detail was amazing. I especially enjoyed the scuffed, worn look of the Captain Gut's crew. Really pushed the point of their tough lives out there among the waves.

Between the cinematography and the artists we got some lovely visual sweeps of the ocean, the horizon, and the collapse/separation of continents. The visuals for Scrat dropping to the Earth's core was perfect and dragged an unexpected laugh from me.

3) Plot/Story - Thumbs Up: The beginning was a little slow, but there was a lot of new ground to cover. It's well worth the wait, however. For this story, they have three major plot elements moving at the same time - Scrat's endless quest, Manny and the others dealing with pirates while trying to find a way to get back home, and Peaches as she struggles with growing up and also getting herself and the others out of the way of impending disaster.

There were also a lot of sub themes as well as subtext and inside jokes. Though we're back in the ice age, we still get to have a lot of fun with pirates, submarines, mermaids, and more. Yay!

Conclusion: Fun film which the adults might just enjoy more than the kids!

Rating: 4 out of 5 (Hubby's Rating: Worth Full Price of Admission)
Posted by Gloria Oliver at 9:19 PM