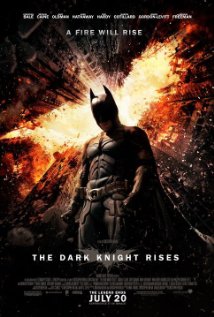 
Premise: After an eight year retirement due to injuries received both physically and spiritually at the end of "The Dark Knight", Bruce Wayne finds himself paying attention to the outside world after Selina Kyle sneaks into the mansion during a benefit, and steals more than just his mother's pearl necklace. This incident is but one in a chain of events, prompted by the new villain Bane, that will bring Gotham down a road that might end in its utter destruction. (Rated PG-13)

1) Acting - Total Thumbs Up: Great work from all the actors involved. Christian Bale showed many sides of Bruce Wayne and Batman that we don't normally see as he is tested unlike ever before. Michael Caine rose to his usual standards and even got more play than usual as Alfred tries to deal with Bruce getting back into the game and other problems. Anne Hathaway was a super fun Selina Kyle. She had several great one liners, which were delivered perfectly.

2) Special Effects - Thumbs Up: Some old and new vehicles make an appearance - The Bat was funky looking, but served very well. Several new gadgets also showed up used to good effect. The roaming EMP field made for a very cool scene in the car tunnel.

The Bane here is not the Bane from the DC Comic's story line when he was introduced into the DC universe about ten years ago, so no real special effects were used on him. However, the beginning action sequence and the major one when Bane announces his presence officially in Gotham were visually awesome.

3) Plot/Story - Thumbs Up: I was very heavy into comic books many years ago and was there when the Bane was first introduced into Batman's world. If you were as well, just forget everything you know before you go see this film. While some major bits were kept, much was either placed in a different position or changed heavily. Venom, for example, which was the main reason for Bane's odd getup and strength/speed, is not used at all - rather Bane is as bad as he is because he had similar training to Batman's.

One nice bit was how this film tied back to matters which occurred in the first and second films creating continuity. That being said, again if you've read the comics from way back, you'll need to forget what you know about people I won't mention so as not to give things away.

I did enjoy the handling of Selina Kyle and it stayed true in most respects. Though I found it funny that not once was she ever called Cat Woman. And while the lower part of her suit was very reminiscent of several incarnations of the character, they did a real cute thing for her head. She had a mask, but also had working glasses with special lenses. When she was working they'd be down. If not, they'd be up, and sitting on her head they looked like cat ears. So Cat Woman is implied if not actually said.

There were also several story lines running at once. The overall story of Bane and Gotham City, then smaller ones for Bruce, Selina, Commissioner Gordon, Alfred, Blake, and even Foley. It somewhat opened the scope of what was going on to include more than just the caped crusader and his trials. This also helped explain the reason the film is 164 minutes long. There is much to tell. Unfortunately, this may have made it drag a little in places, but not overtly so, so worth it. Lots of figurative 'guns' and 'hints' to keep track of too, if you want to figure somethings out before they're revealed. What may appear as inconsistencies in several places actually aren't, they played the 'red herring' card very well.

At the end, some short cuts were taken with regards to nuclear fallout. But then waves of nuclear radiation would have kind of soured things.

But the three concurrent bits at the end really made things pop, making up for it, and gave great closure to the film. (And no, no extra scenes once the credits roll.)

4) Stunts - Thumbs Up: Very nice work with the physical stunts. There are plenty of them and some involved a ton of people. Plenty of car/motorcycle/airplane chases, explosions, collapsing walls, guns, canons, and hand to hand combat to watch. Nothing matched the awesome precision and caliber of the first scene though. Made most of the rest look pale in comparison.

5) Locations/Cinematography - Total Thumbs Up: The cinematography folks took some great shots which when put together with some of the special effects made for a real treat. The stadium scene and pull back to the full city scene were very well done. It was very eerie seeing those bridges blow.

The angles for the pit worked very well and I loved the city in the background outside it. The fact they threw in bats for two different scenes to act as subtext were nicely done as well.

Conclusion: As long as you forget everything you know from the comics, it's a good third installment in this latest of the DC Batman franchises. Some good Gotham caped crusader fun! (Seeing it in IMAX or XD won't add much to the experience - so if you need to save your pennies, do.)

Rating: 4 out of 5 (Hubby's Rating: Worth Full Price of Admission.)
Posted by Gloria Oliver at 9:35 PM