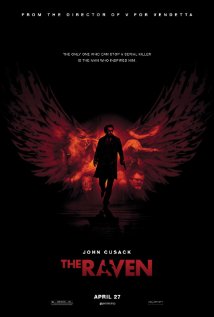 Premise: Author Edgar Allan Poe is drawn into a criminal investigation when a serial killer uses his stories as the basis for the string of crimes. But just having Poe involved is not enough for the killer, who raises the stakes to force Mr. Poe to write again. (Rated R)

1) Acting - Total Thumbs Up: In my opinion, this might just be one of John Cusack's best performances ever. Backed up by a cast of veterans, the whole ensemble shines. Alice Eve was great as the spunky Emily Hamilton. Luke Evans was delicious as Detective Fields. Great job by all involved.

2) Special Effects - Thumbs Up: Grisly deaths abound, but not too gory, though blood was used in abundance. The pendulum effect was specifically poignant. You could almost hear Vincent Price cackling in the background.

The added wide city scenes of  Baltimore and Paris were detailed and beautiful but not as convincing as other efforts in the same vein. But otherwise the special effects and CGI team did a great job.

3) Plot/Story - Total Thumbs Up: Since Poe is dubbed as the inventor of detective fiction, it seemed only apt that he would become embroiled by a serial killer into solving said killer's string of crimes. Better yet was the use of the few facts which are known about the great author's death and weaving them into this fantastical recreation of what may have been the great author's final days.

Bits and parts of many of Mr. Poe's works are woven into the film as well as different aspects of his life. This was obviously written by people who have studied Poe and his works in detail as well as the time period itself. Great job!

The mystery is pretty straight forward with several false trails that still lead forward. Minuscule clues are dotted throughout the tale, but like the protagonists, the viewer must put them together to get a hint of the culprit before all is revealed.

4) Locations/Cinematography - Total Thumbs Up: The theater, Poe's home, the Captain's home, the paper, all the indoor locations were fabulous. The shots of the moon and the raven shown close to the beginning of the film were poignant.


5) Costuming/Makeup - Total Thumbs Up: The period costumes looked authentic from the people on the street, the aristocracy, to the Baltimore police. I also was very pleased to see that Miss Hamilton did not appear as a freshly pressed flower while she was under duress, giving the film even more authenticity.

Conclusion: Totally worth watching. Between the atmosphere, the acting, and the story itself, well worth your time.