This weekend was rather exciting, which also means I got a bunch of pics! Figured I'd share the best or most bothersome of the lot with you.

First off is one proving that the Addam's Family is still alive and kicking! Though they're now using cheerier colors? Heh heh 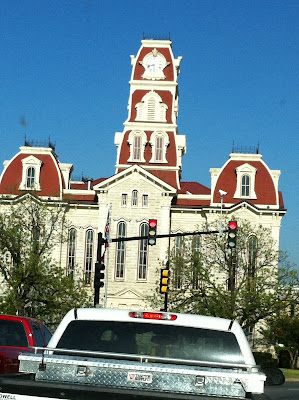 The place is actually in the roundabout in Weatherford. Yes, we were out on a driving bit on Saturday. (Actually a driving nightmare! Between getting lost going and coming back, closed roads, fires, and more! Woo!) 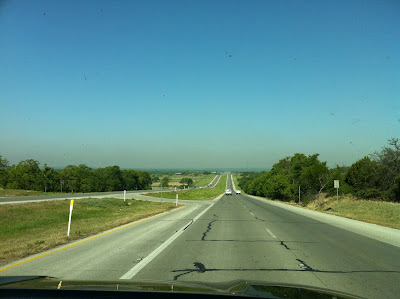 This was on the way Possum Kingdom Lake after Weatherford. If you look at the skyline you can see a dark swath across the sky. No, those aren't mountains, that's smoke from the fires in West Texas and (much to our surprise later) up by the lake itself. 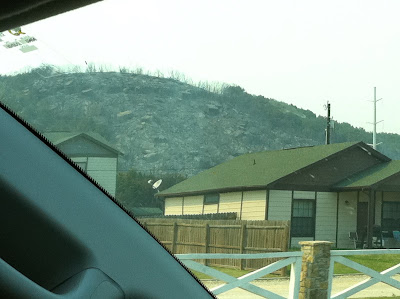 The area had been ravaged by fires just the night before. You can see the burned bald spot on the top of the hill in this picture, with green to either side. And as we found out as we were leaving after a beautiful day up there, the fires weren't out, they were just bidding their time for a wind direction change. 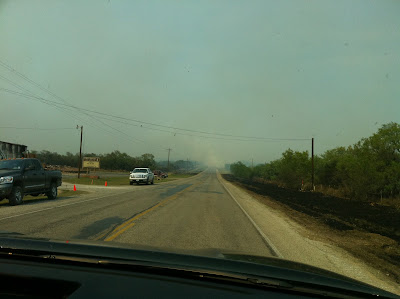 This one you have to look at carefully in several places. Side of the road to the right is black, burned grass. In a lot of places the grass fire burned so fast it only took out the grass and not the bush trees. Others the green bushes were lightly smoking like burning coals in a fireplace, slow but sure. You could see places and how the grass fires had jumped across the road with the help of the wind.

Straight ahead you can see a cloud of smoke. We ended up driving through it and there were actual flames just beside the road. Made our pulse jump that's for sure!

On the left were the remains of a church that burned down the day before. Two more buildings next to it were spared. Though I heard more news about Sunday and it's possible those are now gone as well. 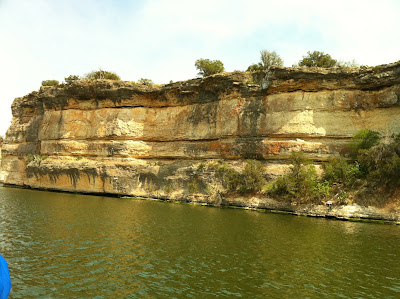 To lighten up the mood, here is a cliff side on the ritzier end of Possum Kingdom Lake. Some really cool houses in that direction. 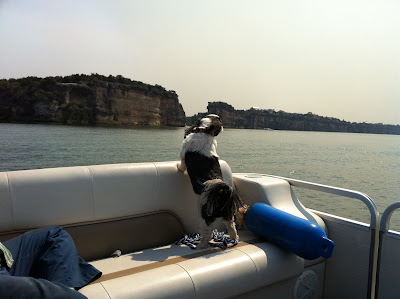 That's Lola, my bro's little sweetie as we go around the bend to Hell's Gate. The wind had changed that morning and blown all the smoke from the night before away and it was a gorgeous day at the lake. Just as we were leaving, around four is when the wind changed and the smoke came back and things got bad.

Last I heard, there's a possibility the cabin is now gone. The fires got big enough again they were threatening the places on the non-cliff side of the lake. Hopefully the fire brake they got last year when there were other fires did the trick, but with the wind to push the fire across roads and over walls, who knows! Feel really weird to have finally seen the place and it may now be gone.

Ack! Happiness! Happiness! Prayers and good thoughts to all the people in West Texas. Stay safe ya'll!
Posted by Gloria Oliver at 6:00 AM