Have been meaning to blog this for a bit, but life got in the way and the child wasn't sharing her pics!

Anyway, I blogged earlier in the year about the loss of Keiko. I didn't blog about another loss only a few months later of our other cat Claudia. (She died while we were at A-kon.) Claudia was at least 13 years old or more. She was one sweet, loving, shy, tough old broad.

So, with my daughter insisting, and only poor Mr Boots left, we decided to get a kitten to replenish the feline population. (I must have Feline Masters. I must keep my arm muscles in shape with petting and serving them! The addiction must be fed!)

As always happens, we end up with more than intended. Son-in-law had a friend/sister who's cat was having kittens. John was determined we would only get females. (Mr Boots gets too rough when he plays with boys but can be easily cowed by girls. Don't ask...) So pictures and questions went back and forth (the family lives 2 hours away). Much ooing and aahing ensued over all the cuteness. So began the whines that we could not only pick one, it was too hard. We had to at least pick two. So say hello to Subaki and Mithril! The latest feline additions to our Feline driven family.

Mithril is the gray and white kitten. Subaki the black and white. Mithril has longish hair, Subaki short. The white patterns are almost identical. Definite sisters. They also have very different personalities even as many traits are the same. 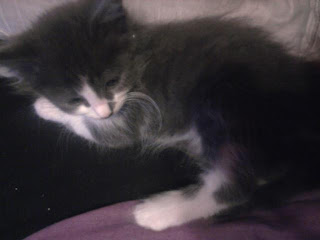 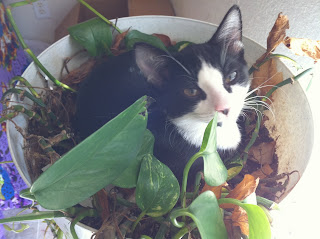 Mithril loves to be loved. Occasionally she will drape herself over my neck like a vibrating collar. She even enjoys being picked up. Unless she's playing, then we don't exist. She also loves the soft food we give as a treat in the morning and before bedtime. So much so she paws at my legs when I am working on doling it out and gobbles hers down as fast as kitty possible so she can then steal the rest of Mr Boot's.

Subaki, on the other hand, is a major touch me not. She's got to many things to do and no time to do them and you better not get in her way! However, there are occasions when she will feel magnanimous and allow love to be lavished upon her. But not too much. It cracks me up how she will hunt me down to lay on me when I'm watching TV yet make sure to lay down by my feet so I can't reach her to pet.

Subaki and Mithril play and explore together. For the longest time Mr Boots fled from them and they ignored him as if he didn't exist. Now they acknowledge each other and even play together a little. They even sleep together! Yet there are a couple of places Mr Boots does not enjoy or want their company. Like my bed at night. I am all HIS. (He pretty much claimed me when Keiko was no longer there to force her will upon him.) First time I ever heard him growl was when one of them came on the bed while he was there. Wow! (Mr Boots is a giant brick but a totally laid back dude. Normally...)

So please join me in welcoming my new master to their home! Huzzah! 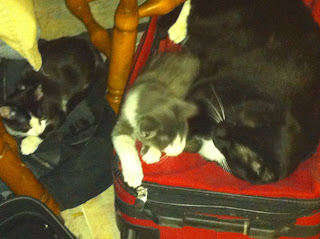